President on the mark in Killarney opener 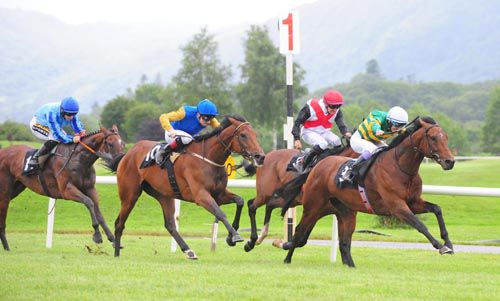 The two market principals fought out the finish in the opening mile maiden at Killarney and it was Aimhirgin Lass, in the colours of President Michael D Higgins, who just got on top in the closing stages to grab the verdict.

Boherbuoy was narrowly preferred in the betting and sent off the 15/8 favourite. Things looked to be going his way as he hit the front a furlong-and-a-half from.

The John Oxx-trained filly Aimhirgin Lass (2/1) stayed on to press inside the final furlong however and put her head in front close home for a short-head success under Declan McDonogh.

The winner had been runner-up on her debut at the Curragh when no match for impressive winner Eshera.

"She ran well on debut at the Curragh but loves a bit of cut and we were hoping for some Kerry drizzle today and she appreciated it!" said Oxx.

"She is a big, rangy filly, has above average ability but had lots of growing pains and took time.

"She needs softer ground, will grow into her frame more and should improve over further.

"The Corrib Stakes at Galway might be a bit sharp for her over seven but would keep the President's spirits up on his annual trip there!

"He is detained with an official visit of the President of Germany."

Coill Na Sionainne took her score to two from five since joining the Willie McCreery team in the Leopardstown Handicap.