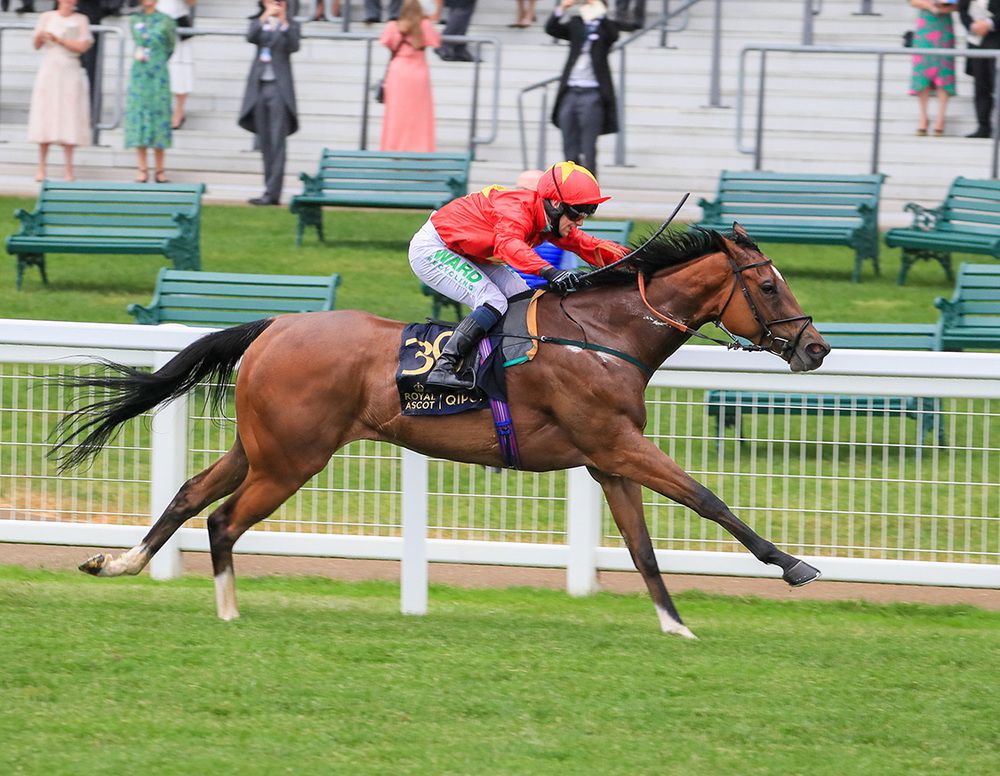 John Quinn's mare enjoyed a great campaign last season, with her first win coming off a mark of 83 before she scored at Royal Ascot in the Buckingham Palace Stakes.

She continued to progress and finished a respectable sixth at Ascot on Champions Day, but began this season attempting to get qualified for All-Weather Finals Day.

That has proved the springboard to her success as, having won at Newcastle against her own sex, she went on to land the 1895 Duke of York Stakes against the boys and was just over a length behind Naval Crown in the Platinum Jubilee last time out.

Always handy under Jason Hart, she had her Ascot conqueror for company but a furlong out she put her stamina to good use and began to stretch away.

Owen Burrows' Minzaal burst out of the pack to claim second with Charlie Hill's Garrus just behind in third, but Richard Fahey’s Perfect Power was well beaten.

Hart told Sky Sports Racing: "The boss had this race mapped out after Ascot and he is never far wrong when he targets one.

"She's really special. She's owned by John Fairley who owns John's yard, he also bred her so it's very special."

It was also a first Group One win for Hart, who added: "Obviously these are the races everyone wants to ride in.

"I've had a couple of near-misses, in the Abbaye with El Astronaute and Safe Voyage in the Foret, but it's nice to come here and get a Group One.

"She's very versatile regards trip and I was a small bit worried about the ground, but she proved me wrong."

"We didn't take her to Newmarket for the July Cup as it's impossible to have an easy race in that and we’ve had this race in mind all season. She stays so well the trip was bound to suit.

"She’s in the Nunthorpe and she’s in the Haydock race (Sprint Cup), but our end game is the Breeders’ Cup.

"There’s the five-and-a-half-furlong sprint but there's also a seven-furlong Grade One for fillies only on the dirt and that really appeals to us.

"I'd say the Nunthorpe is unlikely. She's in the Flying Five at the Curragh and I like the look of that as it’s a win-and-you’re-in for the Breeders’ Cup, everything is paid for and the timing is perfect.

"I’ll also run her in the Abbaye because she was second to Tone The Barone over five when I was getting her ready for Newcastle (Finals Day) and she'd have won with a clear run.

"Haydock and Ascot on Champions Day have to be considered, but for me it will be the Flying Five, the Abbbaye and the Breeders’ Cup — or if something came up we’d seriously consider Haydock.

"She's the best. She ran a mighty race at Ascot, beaten just over a length and it didn’t quite fall for her. She went in under the radar today and didn’t deserve to. She was a bigger price than some she finished in front of at Ascot.

"All season the races in our heads were the Duke of York, Royal Ascot, the Maurice de Gheest and the Breeders’ Cup.

"It's great to have a Group One winner for me and my family and for Yorkshire.

"The Wow Signal was a phenomenal horse, he won the Coventry and the Morny, but she’s snapping at his tail now. She's five but she didn’t race at two and I think that has been massive. Her owner was very patient and it’s paid off."