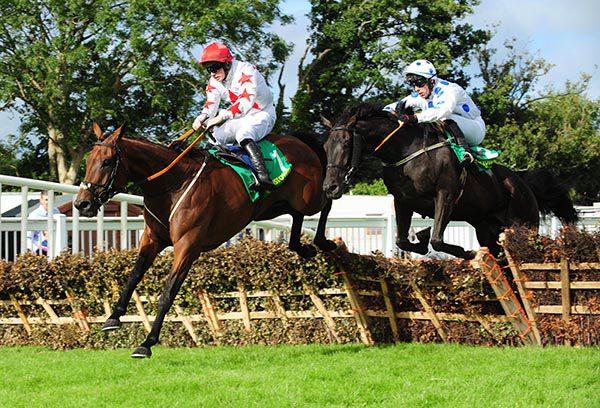 Darver Star continued on a highly progressive upward curve by completing a hat-trick in the Ballygarry House Hotel Novice Hurdle at Listowel.

The Kalanisi gelding won a handicap at Wexford last spring off a mark of just 106 but such has been his improvement in the meantime that he currently holds a rating of 145 and made it three wins in the space of a month.

Think Positive made the running in this 2m4f event but there was little doubt about the outcome after Jonathan Moore sent the well-backed evens favourite (from 11/8) to the front before two out.

The seven-year-old was just pushed out on the run-in to beat Doctor Duffy by a comfortable three lengths, with Ash Hill another five and a half lengths away in third.

Winning trainer Gavin Cromwell said, “He was supposed to win on ratings and it was a good performance. I don’t know if he really enjoyed that ground but he got away with it.

“When he jumps a fence he might improve again, and there is a good chance he could go chasing this season.”