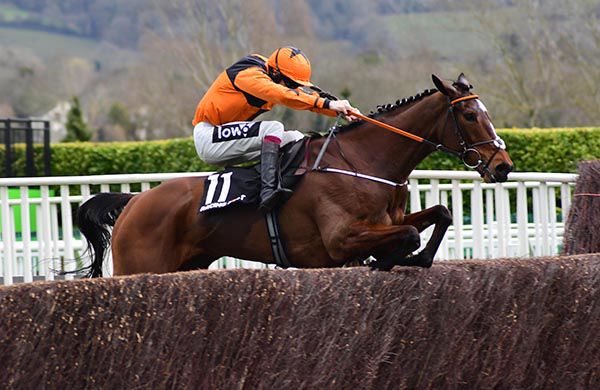 Put The Kettle On and Aidan Coleman
© Photo Healy Racing

Prolific mare Put The Kettle On showed the boys the way home in the Racing Post Arkle Challenge Trophy.

Despite having won four of her previous five starts over fences, the Henry de Bromhead-trained six-year-old was a 16-1 chance on what was her first competitive appearance since landing the Arkle Trophy Trial over the course and distance in November.

Ridden by Aidan Coleman, Put The Kettle On was always close to the pace and was in front rounding the home turn, with Fakir D’oudairies her nearest pursuer.

The latter did himself no favours by walking through the second fence from the finish — and while he tried his very best to bridge the gap racing up the hill, Put The Kettle On refused to bend and passed the post a length and a half to the good.

Rouge Vif ran a fine race in third, with the winner’s stablemate Notebook — the 5-2 favourite on the strength of successive Grade One wins at Leopardstown — ultimately disappointing.

De Bromhead said: “Aidan was brilliant on her and said she just attacked every fence. She had course and distance form in the book, so you couldn’t underestimate her, but obviously Notebook was our more fancied runner.

“She just keeps on improving and I’m delighted, it’s fantastic.”

He went on: “It was the plan to give her a break, as she’d been busy. She’s made amazing progress since winning at Kilbeggan off 116. She’s come a long way.

“We said we’d back off her after November and then we just had to choose between this and the Marsh Chase.

“She handles any ground and Aidan said she loved it today. We’ll enjoy today before making plans, but she’s lightly raced so we’ll see.”

He added: “Notebook was obviously disappointing, but Cash Back dropped out at roughly the same time and it crossed my mind that they had a hard race in the Irish Arkle. He probably wants better ground, too.

“He was unlucky with the start, but Rachael (Blackmore) was tapping him down the shoulder a long way from home, so I thought we were in trouble then.”

Joseph O’Brien said of Fakir D’oudairies: “He ran well, but he missed the second-last and that wasn’t ideal. He had every chance and I was happy with the run. It’s tough for them all out there.”

Harry Whittington was thrilled with the effort of Rouge Vif.

He said: “I’m delighted. He is a warrior to get up for third. The winner is that November form with us and she hasn’t run since, so why was she 16-1? I think if the first start had started, we would have been a bit prominent.

“The ground is testing enough and if it was good to soft we would have had a cracking chance. It was soft, heavy in places and we finished third on ground that wouldn’t have suited.