Rebels to the fore in Cork 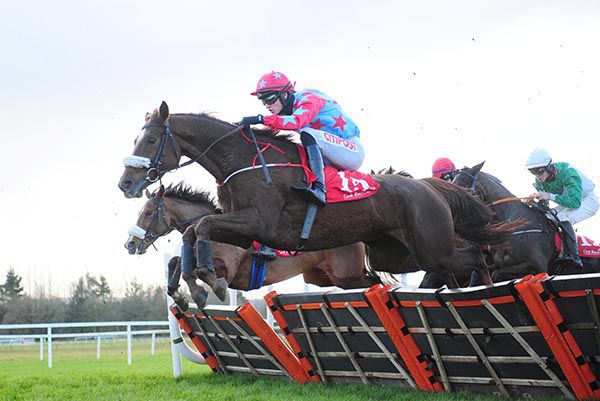 It was a rebel-dominated finish to the Kevin McManus Bookmaker Handicap Hurdle at Cork as Rebel Waltz took the spoils.

The Getaway gelding took a narrow lead as the field straightened for home and showed plenty of tenacity over the final two flights.

He was ridden by Danny Mullins to see off the challengers on the run-in and stuck to his task to score by three parts of a length at 8/1.

Rebel Early stayed on strongly to get up for second at 9/2, backed in from 7/1. Beyond The Law (9/1) was half a length further back in third.

Trainer TJ Nagle said: "The light weight was a big help to him because he is a narrow horse and it was a great ride from Danny.

"Everyone thinks he wants three miles but I think a real strong 2m4f is what he wants. I didn't think he'd handle the ground being so heavy but Danny said it was no bother.

"We'll look for something similar next."

The Stewards interviewed D.J. McInerney, rider of Beyond The Law, concerning his use of the whip in the closing stages of this race. Evidence was heard from the rider concerned. Having viewed a recording of the race and considered the evidence the Stewards found D. J.McInerney in breach of both Regulation 10.3.(g), excessive frequency and 10.3.(f), excessive force. Having considered D. J. McInerney's record in this regard, the Stewards suspended him for three race days.

The Stewards interviewed Thomas P.O'Connor, trainer of Lilshane, concerning the conduct of his charge who refused to race. Evidence was heard from the trainer concerned. Having considered the evidence and the animals previous record in this regard, the Stewards suspended Lilshane for 60 days in accordance with the provisions of Rule 14(iii).

This year’s Randox Grand National meeting will take place in its scheduled slot after Jockey Club Racecourses ruled out delaying the Aintree showpiece.

Heavy penalties meted out to Murphy father and son at Thurles

The performance of Winter Fog, 5th in the I.N.H. Stallion Owners EBF Maiden Hurdle at Thurles today, saw handler Donie Murphy, and his son amateur rider James, in hot water with the stewards.

Industrious Codd puts trip to Tipp to very good use

There was no trouble at all for Fighting Fit (13/8 into 6/5 favourite on the show) in the Connolly's RED MILLS Ladies Handicap Hurdle at Thurles.