Red-hot Harrington and Foley double up with Laelaps 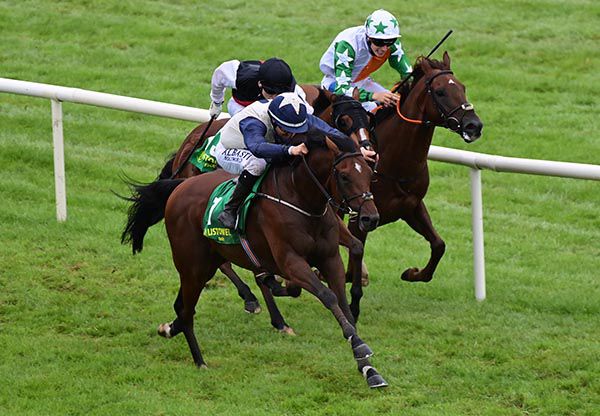 Jessica Harrington continued her golden run with a double at Listowel brought up by Laelaps in the concluding mile handicap.

The 15/2 shot bucked the trend of prominent racers winning on this card as he made sustained headway to third over a furlong out, and set his sights on front-running Spanish Tenor and Dragon Of Malta.

The petrol gauge flicked red on Spanish Tenor as Laelaps stormed past him in the final 100 yards. He won going away by a length and three quarters from Dragon Of Malta (market drifter out to 14/1). Spanish Tenor dropped a length and a half further back in third at 28/1.

Jockey Shane Foley, who also brought up a double, said: "It has been hard to make up ground today but it worked out.

"He is a free-going sort and dropped his head today as we went a good gallop. He is the only horse to have won today making up ground from the back, but he's a not bad horse on that ground.

"We gave him a bit of time after Royal Ascot with an autumn campaign in mind and he is a grand, genuine horse. Sometimes he is too generous and hard on himself but it grand to get another win with him."

Harrington and Foley took the preceding race on the card with Tut Tut.

The trainer has saddled an incredible 24 winners (22 Flat and two National Hunt) in the last three weeks. Foley has booted home 20 winners in the same period.