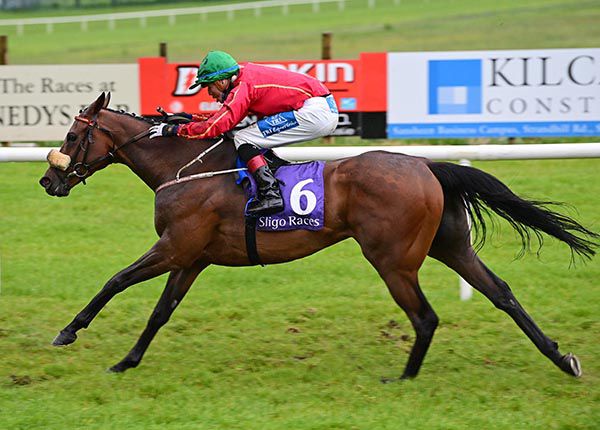 The Tamayuz gelding, who had been placed in eight of his twelve races, chased the leaders before hitting the front on the home turn. From there he stayed on well to draw four lengths clear of market rival Ballinlough Gale (2/1)

It was a seventh success this term for winning rider Scott McCullagh, leaving his dad Niall with a bit of catching up to do after he notched his second of the campaign aboard Noirvento earlier on the card.

“It’s nice to get a winner for Michael Halford,” said the younger McCullagh.

“I started off with him before I went to England and he was very good to me, he gave me a good grounding and I’m very grateful to him for giving me the ride.

“He’s been running well in maidens and handicaps without getting his head in front, but he seemed to enjoy the tighter track and softer conditions today.

“He travelled away fine on the ground, they went a nice gallop, and when I asked him he picked up well and put it to bed nicely.”

Judicial lays down the law again at Chester

‘Life-changer’ Judicial registered another emphatic verdict at Chester as he retained his title in the Listed Children’s Air Ambulance Queensferry Stakes.

Coen gets a good tune out of Bell Ex One

There have been some great finishes this week at Galway and the concluding second division of the Fr. Breen Memorial Handicap was another to add to that category as Bell Ex One (9/1) just got the verdict over a gallant Fallen Forest (28/1) by a short head.

Insane Bolt (11s into 8/1 on the show) hit the front in the final furlong to win the first division of the Fr. Breen Memorial Handicap.

Micro Manage a tenth winner of the festival for Mullins

The 8/11 favourite Micro Manage landed the JPK Fencing Systems Race to give Colin Keane a double on the day.