Seven makes it five for Joseph O'Brien on good Friday 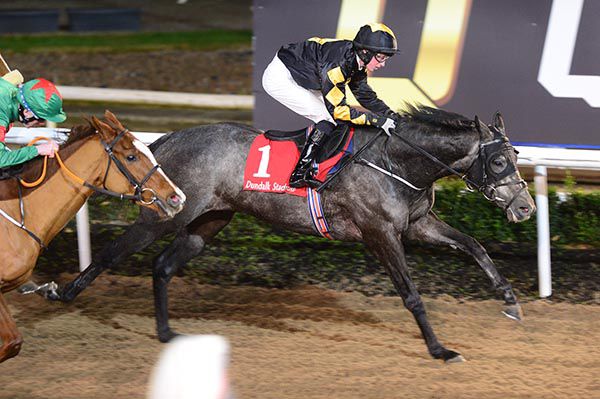 Shadow Seven (5/2 into 2/1 favourite) followed up on his course win from nine days earlier to round off a great day for trainer Joseph O'Brien in the concluding Dundalk Stadium - Light Up Your Night Handicap.

Joining his stable companions Aforementioned, Scarlet And Dove (Limerick), King's Vow and Too Precious on the winner's podium, Shadow Seven, in the hands of Alan Persse, got home by half a length from Every Beath.

“He won well over a mile-and-a-half the last day and the plan was to make plenty of use of him but he was a bit slow away,” said Persse.

“To be fair to him he ground it out well. He did it well in the end.

“That's five winners now for Joseph today (reportedly breaking the record for wins in the calendar year at Dundalk on 34) so it's grand to be part of it.”

The Stewards interviewed Anthony McCann, trainer, in relation to his failure to nominate a rider for his charge Konig Hill at declaration time. Evidence was heard from the trainer concerned who stated that he had difficulty in finding a suitable rider until the withdrawal of Ten Bears from this race. Having considered the evidence, the Stewards noted the explanation offered and reminded Anthony McCann of his responsibilities in this regard.

The Stewards interviewed D.M. Simmonson, rider of Effernock Fizz, concerning his use of the whip in the closing stages of this race. Evidence was heard from the rider concerned. Having viewed a recording of the race and considered the evidence the Stewards were of the opinion that D.M. Simmonson was in breach of Regulation 10 (3)(b) in that he used his whip unnecessarily when his chance of winning or being placed was clearly gone. Having considered his record in this regard, the Stewards cautioned D.M. Simmonson.