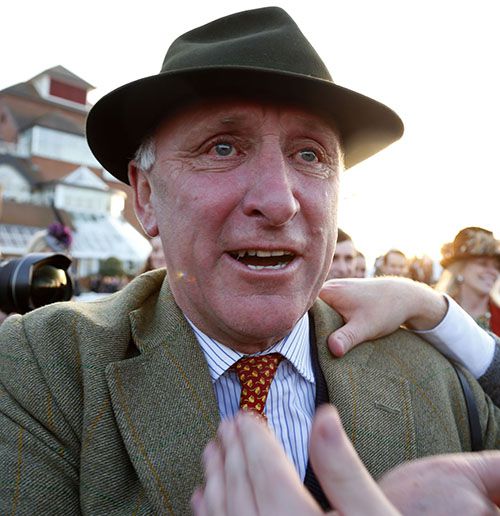 Oliver Sherwood reports the talented Queens Gamble to be “99 per cent fine” despite being ruled out of her intended engagement at Huntingdon on Sunday.

The four-year-old, who has impressed in two appearances at Cheltenham and is as short as 7-1 with Unibet for the Champion Bumper at the Festival, was due to line-up in the Listed Fitzdares Adores Henrietta Knight Mares’ Open National Hunt Flat Race but was declared a non-runner on Saturday following a bad scope.

Queens Gamble was scoped on Saturday having coughed the previous day and although confident it will only be a small setback, Sherwood is keen to exercise caution with such an exciting prospect at both an early stage of the season and the filly’s racing career.

He said: “The horse is 99 per cent fine. She gave a cough on Friday morning which nine times out of 10 I wouldn’t take any notice of and then Friday night my head lad said she had a little bit of a crusty nose.

“So, we had a vet come out and scope her on Saturday after exercise. It was pretty clean to the naked eye, but in biological terms her neutrophils were marginally high, which means something is going on.

“The owner, breeder and myself all thought it was a no brainer — you can’t risk it. It’s boring, we’re as frustrated as the next person, but no one has died.”

The Lambourn handler will now head back to the drawing board as he plots a course to the spring festivals and has identified a possible raiding mission to Ireland if conditions prove suitable.

“We have to make a plan over what to do now,” he continued. “My gut is telling me she won’t run over the Christmas period and weather might dictate.

“She’ll either go to the Alan Swinbank (at Market Rasen) at the end of January or possibly Leopardstown for the mares’ bumper at the Dublin Racing Festival over there. I’d be loathe to take her over there if it came up very testing ground, but it’s a fair way off at present.

“I want to keep her to her own sex for the time being until we hit the big time at the Festival if we get there, God willing.”