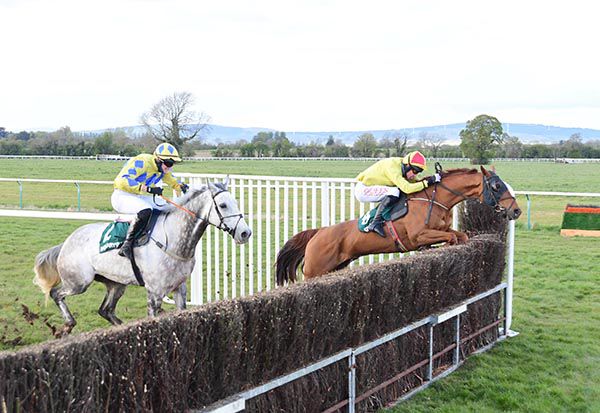 Sliabh Mhuire Lass (4/1) made virtually all under Derek O'Connor to land the maiden hunters' chase at Tipperary.

The sole mare in the field had won six point-to-points but the last one came in October 2018.

O'Connor sent her into an early lead over this extended two miles seven trip and the mare, in the first-time blinkers, outgunned 2/1 favourite Cardboard Gangster by a length and three quarters for trainer Grainne O'Connor.

None of the other runners could land a blow and it was 27 lengths back to third-placed Roundstone at 50/1.

Derek O'Connor's brother Pauric O'Connor (husband of the trainer) said: "She has six point-to points won and has loads of ability but would be keeping a bit for herself. She didn't need blinkers in point-to-points because she was happy going around the bales so we stuck them on today and it is great to win.

"She has a great page and will be covered in the next few days. I don't know what stallion yet and she'll race away for a few months over the summer.

"Leonard McMahon, from Newmarket House, bred her and has all her family for generations - she has a beautiful old page and it is brilliant to get the win with her."

Woodland Garden one to follow after securing first win

Ballydoyle’s Woodland Garden got off the mark at the third attempt in the Irish Stallion Farms EBF Fillies Maiden at Gowran.

Mr Moondance blitzes them in Downpatrick

Mr Moondance called the tune with an all-the-way success in the opportunity handicap hurdle at Downpatrick.