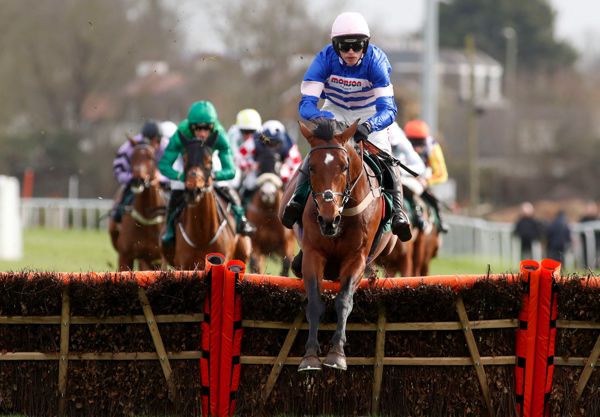 Paul Nicholls is confident Solo can prove his sparkling British debut was no fluke by providing him with a third victory in the JCB Triumph Hurdle at Cheltenham.

Solo was an impressive winner at Auteuil last November, and plenty was expected on his first start for ‘Team Ditcheat’ in last month’s Adonis Hurdle at Kempton.

Nonetheless, few could have envisaged quite such an emphatic display — as he streaked 13 lengths clear of his rivals.

That performance saw Solo shoot to the head of ante-post lists for a race his trainer has previously won with Celestial Halo (2008) and Zarkandar (2011).

Nicholls said: “Solo has come out of the Adonis in great form. He won very nicely at Kempton — it was a good performance.

“I was actually worried going into Kempton that the track might find him out a little bit — going right-handed on a flat track — but he coped with it well.

“He has a bit of experience, having previously run at Auteuil, and handles soft ground.

“We bought him as a future chaser and he strikes me of being in the model of Master Minded.

“We are hopeful he will go well.”

Nicholls also saddles the improving Sir Psycho, while Solo’s two biggest rivals from Britain appear to be the unbeaten pair Allmankind and Goshen.

Allmankind is three from three for Dan Skelton, already has winning form at Cheltenham and completed his hat-trick in the Finale at Chepstow in late December.

“I was going to go to Trials Day, but I’m glad I didn’t — I just thought I’d have him super, super fresh.

“He loves to be up there, and that’s the way we’re going to get on and do it. If something wants to go faster than us, you’re welcome — I doubt anyone will, though.

“He’s a different league to any juvenile I’ve had before. We’ve had some nice horses through our hands at all ages, but he’s three from three, and realistically no one has got all that close to him.

“It’s going to be a different thing in the Triumph, but I’m very, very happy with him.”

Goshen has won his last six starts for Gary Moore, with three wide-margin triumphs on the Flat followed by three demolition jobs over obstacles.

Moore said: “He seems fine at home, and we are looking forward to running him in the race. I think he will be fine with the occasion.

“He has not put a foot wrong so far, and it has been amazing how easy he has been winning his races. It will be interesting to see how he gets on here.

“Solo was very impressive at Kempton, and Allmankind was good last time, so it is no penalty kick, but we hope he will run a big race.

“He is the best juvenile I’ve had by a long way, he has just got to prove it now.”

The Irish challenge includes Joseph O’Brien’s pair of A Wave of The Sea and Cerberus, Henry de Bromhead’s Aspire Tower and the Willie Mullins-trained duo of Burning Victory and Hook Up.

Grade One honours are also up for grabs in the Albert Bartlett Novices’ Hurdle, in which Thyme Hill heads the betting for Philip Hobbs and Richard Johnson.

Third in the Champion Bumper at last year’s Festival, the son of Kayf Tara has since won each of his three starts over obstacles.

“It’s always looked as though three miles wouldn’t be a problem and could even suit him better,” said Hobbs.

“Winning the Grade One (Challow Novices’ Hurdle) is obviously very good form, and he has always looked progressive as time goes on.

“We are certainly very hopeful of his chance.”

Joe Tizzard, assistant to his father, said: “Harry Senior has improved all season. We were disappointed with his run at Exeter, but it turned out it was Sporting John who beat him, and his form is very strong.

“He is a horse that runs behind the bridle, so stepping him up from two and a half to three miles will suit him him well.

“Lieutenant Rocco has done nothing wrong and is a big, strong galloper. He has looked very impressive in his two runs, and you can’t fault him.”

A formidable Irish contingent includes a Mullins trio of Aione, Janidil and Monkfish as well as Latest Exhibition from Paul Nolan’s yard.

The latter has won three of his four starts over hurdles and was last seen landing a Grade One at the Dublin Racing Festival.

Nolan said: “He’s travelled over well. He had a little canter on Wednesday morning, and we’re very happy with him.

“I think the step up in trip will suit — we’ll keep our fingers crossed for a good run.”