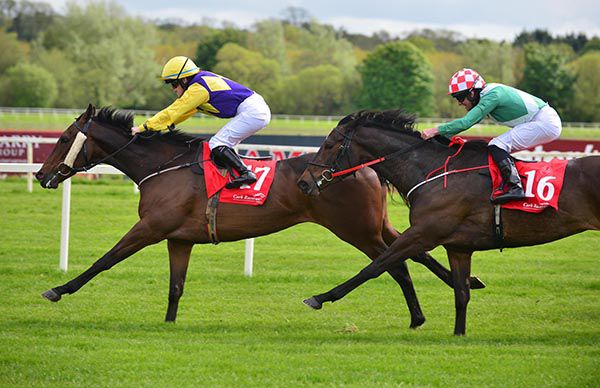 Jockey Sorcha Woods rode a good race to be second on 40/1 shot Carried at Navan on Saturday and today she got off the mark, at Cork, helping the Keith Watson yard to a double in the penultimate event with Odd Venture (22/1).

The Watson team travelled two horses down from their County Armagh base to Mallow this afternoon, and the other one, Iva Batt, got the job done under Shane Foley earlier.

On his 17th outing in public, and with Woods aboard for the first time, Odd Venture was soon up there in a pace-setting role in this division one of the Follow Us On Twitter Handicap.

There was late interference to three parts of a length runner-up, Must Be Dreaming, but it was no surprise when the result stands no alternation message came through after a steward’s enquiry.

"The race didn't go to plan as we were going to drop him in but he jumped so well and was travelling so nicely I thought I'd leave him there and didn't want to upset him,” said Woods.

"I've had a point to point winner but that's my first racecourse winner, I'm 21, from Naas, and it's a great feeling. I'm based with Marshall and do a couple of days a week with Shane Duffy too and both have been great to me and given me lots of opportunities."

"Sorcha is with me and was unlucky when second on Carried on Saturday. She has been riding well and is well worth her 10lbs claim."

The Irish Horseracing Regulatory Board Veterinary Officer examined Praying Mantis, trained by Andrew Kinirons, at the request of the Stewards and reported the animal to have blood in its mouth possibly as a result of it biting its tongue and also to have a wound on the inner aspect of its left hind heel.

The Stewards enquired into possible interference inside the final 100 yards involving Aprils Joy, ridden by C.D. Maxwell, placed third, Must Be Dreaming, ridden by J.A. Heffernan, placed second and Odd Venture, ridden by Sorcha Woods, placed first, where it appeared that Odd Venture drifted to the left and may have caused interference. Evidence was heard from the riders concerned. J.A. Heffernan stated that a few strides before the line Odd Venture tired and drifted into his path but the manoeuvre had no affect on his placing. C.D. Maxwell stated that Must Be Dreaming came across his mount just before the line. Sorcha Woods stated that as her mount tired close to the line it began to drift. Having viewed the recording of the race and considered the evidence, the Stewards were satisfied that any interference caused did not warrant any action and made no alteration to the Judges placings. Sorcha Woods gave her evidence in the presence of Marshall Watson.

L.F. Roche, rider of Praying Mantis trained by Andrew Kinirons, reported to the Clerk of Scales that his mount got struck into from behind.

A.J. Slattery, rider of Phantasus trained by H.Rogers, reported to the Clerk of Scales that his mount was very slowly away.