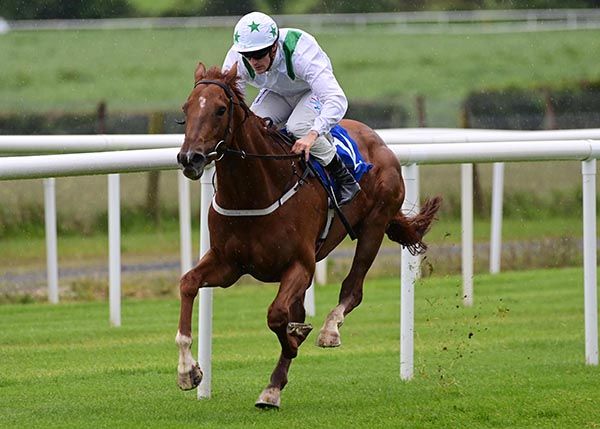 The Paddy Twomey-trained Spasiba galloped on strongly in the closing stages to run out a cosy winner of the ten furlong maiden at Roscommon.

Billy Lee, recording a double on the night, was always prominent on the French-bred colt and sent him to the front over half a mile from home.

He asked the 7/4 favourite for an effort passing the two furlong marker and the chestnut stayed on well in the closing stages to post a four-and-a-quarter length win over Hallowed Star.

Spasiba had been a promising third on his debut at Cork early last month.

Twomey said:- “I was hoping he’d do something like that. I thought he ran very well in Cork and he came on well from that run. He’s a baby and I think he’s pretty nice.

“He really wants to go further and he’s bred to stay but he has the class to do that over a mile and a quarter.

“He’s versatile ground wise. He has a big long stride on him and I’d say he’d love fast ground.”

The ground was changed to soft after the running of this race.