Tenth winner of the season for Liz Doyle 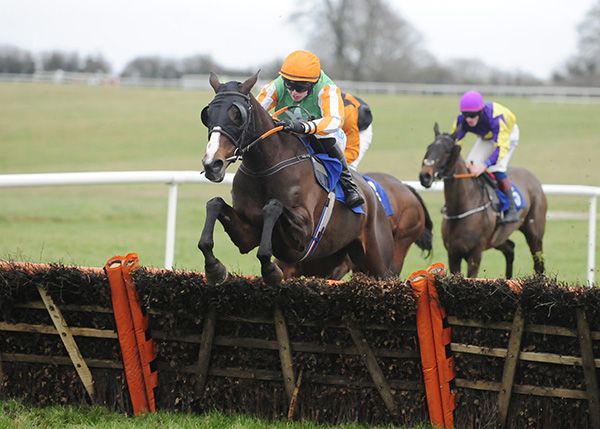 Liz Doyle moved onto the ten winner mark for the season when Ahgetawayoutadat (7/1) stayed on well for Sean O’Keeffe (18th winner of the campaign) to take the Horse & Jockey Handicap Hurdle by seven lengths from Monty’s Mission (6/1), with a similar margin back to the 5/1 favourite Rebel Waltz in third spot.

The winning daughter of Getaway was making the breakthrough on her fourteenth start over hurdles (didn’t run in point-to-points or bumpers) and had run well on her penultimate start when second at Fairyhouse, although disappointed at the same course last month.

She seem to have improved a little bit for the fitting of blinkers, and is a half-sister to Earth Planet, who was a four-time winner for Paul Nicholls around the beginning of the previous decade.

"She's a small, cheap mare for a syndicate that just wanted a bit of fun. She saw it out well. She's slow and just about on the bridle the whole way, she wants three miles. Hopefully we can nick something similar again."