Theatre World makes all to land a punt 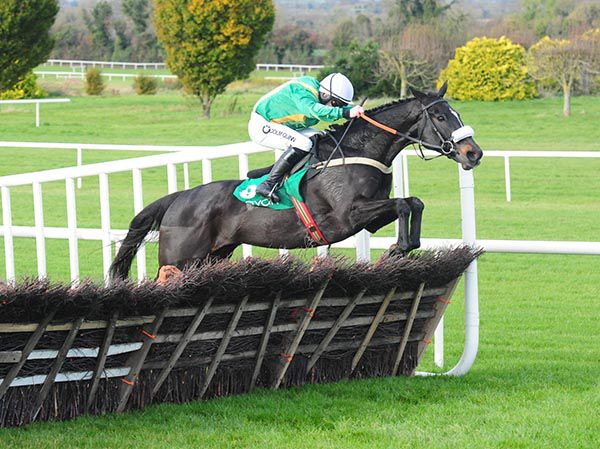 Course and distance winner Theatre World (as big as 9/1 this morning, 9/2 into 7/2 on course) made all to win the opening Navanracecourse.ie Handicap Hurdle under a well-judged ride by Luke Dempsey.

The winner and runner-up Electricitywork (14/1) were to the fore throughout, and the seven-year-old by King’s Theatre stretched away after two out, where Bay Ambition came down when disputing second, to record a second win of the campaign by a margin of three and a quarter lengths.

Cherif De L’Isle (10s into 7s) caught the eye on his first start for Gordon Elliott when keeping on well into third, with The Church Gate (9/1) completing the placings in fourth.

Theatre World had beaten a big field here on good ground in September, but showed he could handle testing ground when second at Limerick last month.

Galway-based owners the Downtown Syndicate had also enjoyed success with the O’Sullivan-trained Benefit Run at Thurles on Thursday.

The winner brings to mind the similarly-named Aidan O’Brien stalwart of the 1990s, runner-up in three Champion Hurdles in a row between 1997 and 1999.

“He won here the time before last and I thought he wanted a bit of nice ground but he handled the this ground fine in Limerick when he finished second.

“The form has stood up well from Limerick as the third horse Fit To Be Tied came out and won afterwards.

“We had him entered in a beginners chase at Fairyhouse last Monday but I didn't declare him as I saw this race coming up.

“I thought we'd have one more go at a hurdle race before we going jumping a fence.

“He's improved well and Luke was delighted with him. I know there were a few fallers but I think he still had a bit in hand going to the last.

“He's a lovely staying horse and you can't beat pedigree, he has a lovely pedigree. He's a King's Theatre and cost plenty as a three-year-old and the pedigree comes through.