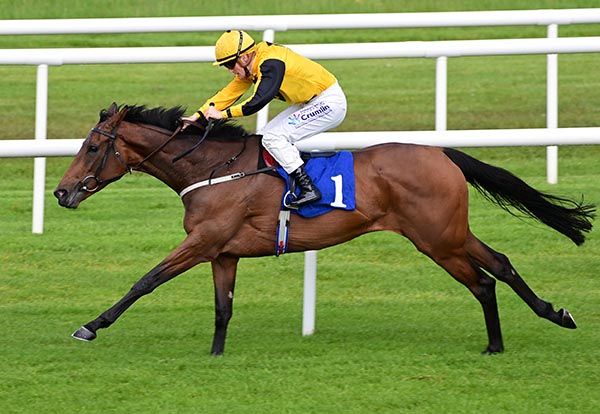 Rosscarbery landed her hat-trick in fine style at Roscommon this evening as jockey Billy Lee also recorded a treble on the night.

It was a quick double for trainer Paddy Twomey as the filly ran out a cosy winner of the featured fillies handicap with the Tipperary handler also teaming up with Lee half a hour earlier with Spasiba.

Rosscarbery is now three from three since joining Twomey following wins at Dundalk and Sligo.

The 6/5 favourite tracked leader Zola Sakura in today's ten furlong contest before cruising into the lead over two furlongs from home.

Lee sent his mount on over a furlong from home and she galloped on strongly to post a cosy two-and-three-quarter length success over Pachmena.

Twomey said:- “She’s a lovely filly, this was a natural next step after Sligo and I’d say her handicap days are probably behind her.

“She’s uncomplicated and is enjoying racing. She’s bred to stay and I’d imagine we will look for a Stakes race now.

“She doesn’t mind an ease but she has form on all sorts of ground and she has won in Dundalk.”