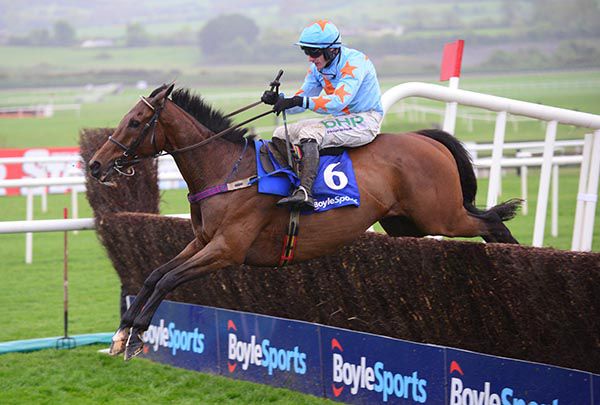 Un De Sceaux
© Photo Healy Racing
Un De Sceaux may be rising 12, but trainer Willie Mullins reports him to be showing all his old exuberance on the gallops as he prepares for his third run in Saturday’s Betfair Tingle Creek Chase at Sandown, having won in 2016 and finished second to Altior 12 months ago.

Part-owner Colm O’Connell said: “We’ve always been aiming at this race. He’s been in since July and the rain has been a massive plus — this time last year we were struggling to get work into him.

“If he gets beat we’ll be telling everyone he’s 11 now and owes us nothing, but if he wins we’ll be saying ‘you’ve let an 11-year-old beat you’.

“We’re in bonus territory now, there’s no doubt about it, but he was absolutely brilliant at Punchestown and I think it was his way of telling us he’s a two-miler after running in the Ryanair.

“He loves it out in front and while the others might want him in the race to set a gallop, what I’d say to them is ‘be careful what you wish for’.

“We’re looking forward to it, it looks a great race, we’ve already had some crackers this season and this looks like being another.”

Politologue, successful in 2017, has already come up against Defi Du Seuil once this season in the Shloer Chase at Cheltenham.

On that occasion Philip Hobbs’ younger rival quickened up smartly to win, but this time around Paul Nicholls’ grey will be 3lb better off and the champion trainer is hoping that will be enough — with the aid of a run under his belt — to enable him to turn the tables.

“A faster run race would have suited us last time, but there were no excuses as it was our first run of the season,” said Nicholls.

“He was beaten by a very good horse, but it will be interesting to see what happens on Saturday.

“We are hoping Un De Sceaux might come over and go a very good gallop. Politologue is all ready to go though.”

Nicky Henderson has entered Janika after he made a stylish winning return to action in the Haldon Gold Cup at Exeter, while in the same Simon Munir and Isaac Souede ownership is Alan King’s Sceau Royal, who ran such a good race in the Champion Chase last season.

Ruth Jefferson has given Waiting Patiently the option and Henry de Bromhead’s Ornua could also make the journey from Ireland.

Also on the card is the Grade One Read Road To Cheltenham At racingtv.com Henry VIII Novices’ Chase, but missing from the anticipated field is Olly Murphy’s Brewin’upastorm.

Murphy tweeted: “Unfortunately Brewin’upastorm will miss his intended target @Sandownpark this weekend due to a small setback.”

Dan Skelton is responsible for three of the eight novices in Nube Negra, Beakstown and the mare Maire Banrigh.