Universal a popular winner of the Naas nightcap 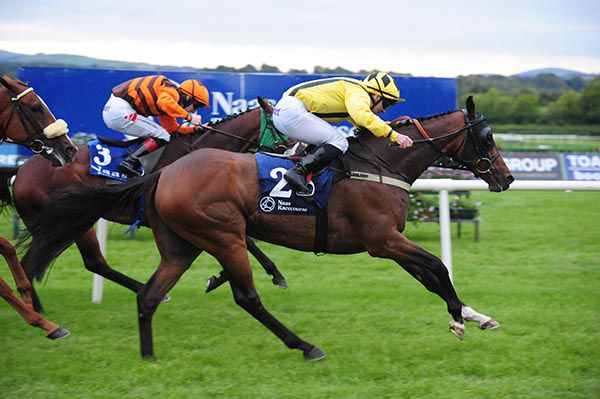 We had two outsiders, Crossingoz and Fake Media withdrawn at the start, but that'll have mattered little to many punters at Naas as Universal Focus (100/30 into 2/1 favourite) sent plenty home happy with his win in division two of the Nursery Of Champions Handicap.

Gary Carroll had to wait to secure a clear passage behind the leaders from two furlongs out.

There was the same distance then to Lady De Vesci in third.

"He was knocking on the door and the last time Gary rode him in Cork he won on him. He hangs on to plenty and pricks his ears," said winning trainer Ross O'Sullivan.

"Gary said it probably suited that he got caught a bit and delayed his challenge. It worked out better as he wasn't in front for too long.

"He hasn't been out of the money all this year, and hopefully we can find another one before the year is out."

Under the provisions of Rule 90 (iii), the Stewards allowed Afillyation (GB), trained by Shane Nolan, to run on receipt of the trainer's written assurance that the horse was correctly vaccinated in accordance with Rule 91.

The Stewards informed William J. Fitzpatrick, trainer that Crossingoz, would have to be recertified before being declared to run from stalls again.

The Stewards informed Charles O'Brien, trainer that Fake Media, would have to be recertified before being declared to run from stalls again.

R.P. Downey, rider of Afillyation (GB) trained by Shane Nolan, reported to the Clerk of Scales that his mount didn't stay.

Frankie Dettori will look to Country Grammer to go one better than last year and give him a first Saudi Cup victory as his valedictory lap begins in earnest later this month.

Connections of Honeysuckle believe the Cheltenham Festival is the right place for their dual champion hurdler to bow out having announced she will have one final run in the Close Brothers Mares’ Hurdle next month.