Villanova Queen one to look forward to for connections 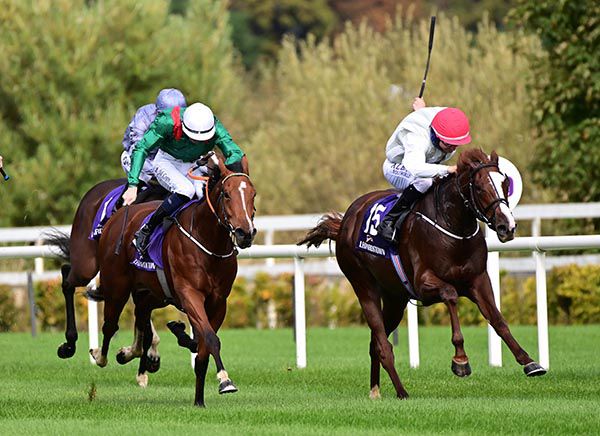 Aidan and Joseph O'Brien's joint favourites Thoughts Of June and Clemmie C were out of the frame as 12/1 chance Villanova Queen took the opening Irish Stallion Farms EBF Fillies Maiden at Leopardstown for Jessica Harrington and Shane Foley.

Villanova Queen didn't get a trouble free passage but showed a nice bit on debut at the Curragh three weeks ago, performing better than a tenth place finish suggested.

Owned by William Crager, the Mastercraftsman chestnut today came forward nicely to beat Kerkiyra, and another Joseph O'Brien runner, Above The Curve, by three parts of a length and half a length. The bronze medallist was very promising on debut.

Said Mrs Harrington in the aftermath: “I’ve been wanting them to have a cutaway rail here for years. It’s threw them all out wide and everybody had a fair chance. They were lovely and spread out.

“This filly was in behind on her first run at the Curragh and didn’t know what to do. She was galloping into the horses in front of her.

“She has come on a lot and is a beautiful filly for next year. She’s shown us a good bit at home and I was disappointed with her first run.

“It’s lovely for Bill (Crager, owner) and she was bought by Ben McElroy.

“She won’t run again this year and will be a mile and a quarter or mile and a half filly next year. She should stay well.”

The Stewards received a report from Ms. J. Taylor M.R.C.V.S., M.V.B., Irish Horseracing Regulatory Board Veterinary Officer, regarding the passport for Starlight Rose, trained by Peter Lawlor. Evidence was heard from the Veterinary Officer and the trainer concerned. Ms Taylor stated that the discrepancies identified in the markings recorded when the passport of Starlight Rose was previously inspected had not been corrected since then. Mr. Lawlor accepted that this was the case. Having considered the evidence, the Stewards ordered the withdrawal of Starlight Rose in accordance with the provisions of Rule 90 (v).