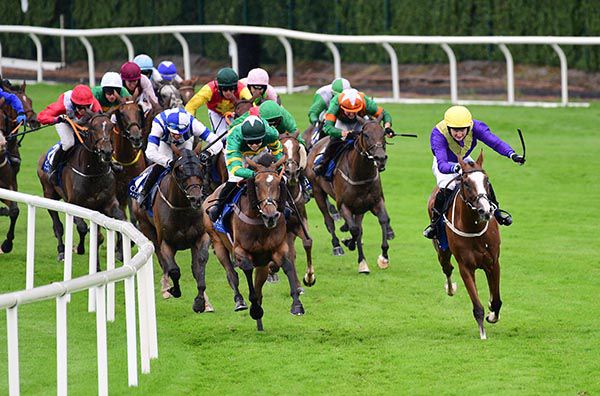 There wasn’t a lot of pace on and it paid to be handy as Litterale Ci and Foveros led the field with a circuit to race.

Maguire, successful in last year’s renewal on Princess Zoe, was hard at work in third place with two furlongs to race, as Coltor had a few lengths to make up on the pacesetters.

The Free Eagle gelding, fifth to Jeff Kidder in the 4-year-old handicap hurdle at Cheltenham, found plenty for pressure though and, after being switched off the rail a furlong out, wore down Foveros (8/1) close home to score by three quarters of a length under a jubilant winning rider.

It was Weld’s first win in the race since the Jane Mangan-partnered Midnight Music in 2012 prior to which he had won it three times in a row between 2007 and 2009. This was his eighth win in the race as a trainer.

"I thought he'd run very well last time out at the Curragh (on Guineas weekend) but by the time the last race came, the ground was gone very heavy and testing and that's not for him. It was beautiful ground today, on the slow side of good .

"Finny was with me for a couple of years, is a very talented guy and has been in France riding successfully for the past six weeks. He came back especially to ride today and this is the first horse owned by Mischa Bucher, son of Eva Haefner of Moyglare Stud.

"I thought coming down in the car that a two-mile handicap at York in the middle of August would be a plan for him. York is now the immediate target.

"He'll go jumping at Leopardstown at Christmas time, he never wants the ground too heavy, hence the reason.

"It’s a lovely race to win, it has been a very lucky race for me as a trainer and I won it four times as an amateur jockey, starting as a 15-year-old."

He added of his juvenile debutant Duke de Sessa, who finished a close third in the opener: "My two-year old ran a super race and greenness beat him. He loves an ease in the ground but the ground has been very firm and dry for the past number of weeks.

"It was just the way it happened (to debut today) and on the day he wasn't quite good enough. He is a very smart colt in the making."