Yanworth back with a bang up in trip 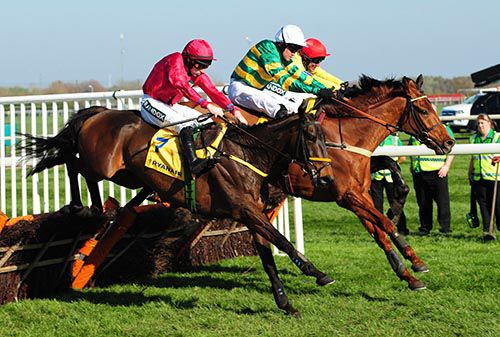 Yanworth (far side)
© Photo Healy Racing
Yanworth showed stamina is his forte as he ground out a determined success in the Ryanair Stayers Liverpool Hurdle at Aintree.

The seven-year-old cast aside any doubts about seeing out the three-mile trip when staying on strongest of them all to lift the Grade One and atone for his Champion Hurdle disappointment.

Restrained near the back of the field early on by Barry Geraghty, the 9-4 favourite was one of four in with a live chance over the penultimate flight.

Over the last four soon became three as the Alan King-trained runner, together with Coral Cup winner Supasundae and Snow Falcon, pressed on.

As Geraghty asked for a maximum response the JP McManus-owned gelding delivered, getting up to deny Supasundae by a length with Snow Falcon a further three-quarters of a length away in third.

Geraghty said: "He kept going there. He bundled the third-last, I just didn't want to commit as I didn't want to land in front. He made a mess of it but recovered quickly and was good at the last two.

"Maybe the (two-mile) trip (found him out at Cheltenham), but he is better than that. I would say he probably slightly under performed. He got very warm beforehand.

"I think he's probably a middle-distance (horse) or stayer really."

King said: "We were trying three miles today and it was a long run-in. I'm relieved more than anything, delighted with him.

"He won a Christmas Hurdle and a Kingwell so we had to go to the Champion Hurdle. I wasn't confident today, but we got away with it.

"I think he will be even better over a fence and he will go novice chasing in the autumn."