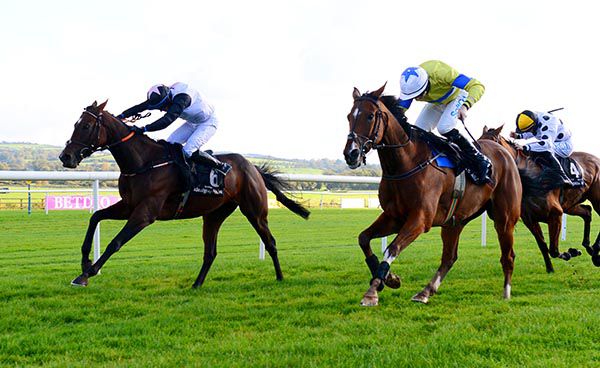 Five lined up in the Idealgraphix.ie Branding Irish Racecourses Novice Chase (Grade 3) and all bar Razoul held a chance racing down to the last.

Having been held up in rear, but in touch, by Dylan Robinson, Zarkareva (5/1) landed running despite just brushing through the top of the final fence and found plenty under hands and heels to beat front-runner Polished Steel (12/1) by two and a quarter lengths.

15/8 favourite A Wave Of The Sea, having made a few novicey errors on the way around, kept on at the same pace after the last to be just a head further back in third.

A 4-year-old by Authorized, the Robcour-owned filly had won a juvenile hurdle in France and, having fallen on her chase debut, easily won a beginners’ chase next time out at Sligo.

She benefitted from getting all the allowances here, being in receipt of 23lb from the penalised runner-up, albeit winning rider Robinson couldn’t utilise his 3lb claim in this Graded contest.

It was his second Graded race victory after winning on Ornua in a Grade 3 at Roscommon a couple of years ago.

"She gave me a great feel and when I asked her to quicken she winged the last and did it all very easily," said Robinson.

“Her jumping got better as the race went on. She travelled nicely and as she was getting there I was taking her back the whole time. I was very impressed with her.”

Zarkarev was introduced at 50/1 by Paddy Power in the market for the new Mrs Paddy Power Mares' Chase at Cheltenham next March.