Aspar gets deserved win to his name 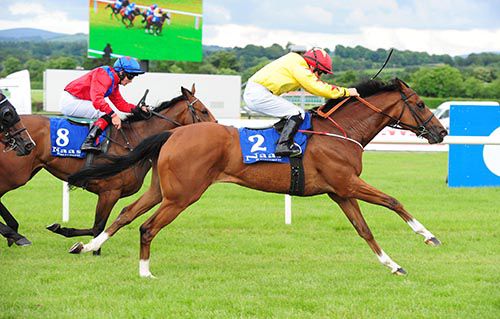 Aspar is ridden out by Wayne Lordan
© Photo Healy Racing

Aspar got a deserved win to his name, as he took the Coral.ie Maiden under Wayne Lordan for Tommy Stack.

Second on five of his six starts before today, the son of Holy Roman Emperor was sent off a 4/1 chance this evening (was as short as 11/4 last night).

Settled behind the leaders on the outer, he was pushed along from two furlongs out, and was ridden to challenge with over a furlong to race.

He got to the front with less than 50 yards to go, keeping on well to score by three parts of a length.

Frosty Dream (20/1) ran a fine race to take second under Robbie Downey for Eddie Lynam, while Sufoof (5/1) was a length back in third under Chris Hayes for Kevin Prendergast.

I Will Excel, who is now without a win in fifteen starts, was sent off the well-backed 5/2 favourite (11/2 last night and from 4's on-course) under David Simmonson for Michael O'Callaghan, and he finished fourth.

Fozzy Stack said afterwards: "The owner, Howard Liang, is from Hong Kong and he might end up there. I think he wants six furlongs and, if he got into the Scurry (at the Curragh, July 16th), he could go there."