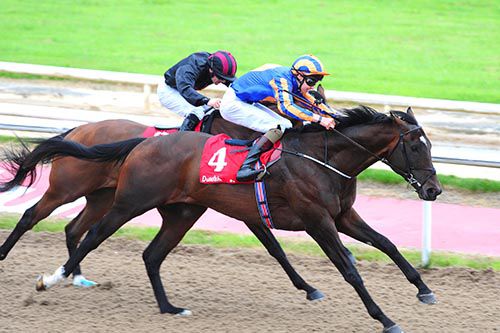 "He learned a lot from the first day," said winning rider Donnacha O'Brien after bringing home Zenyatta's brother De Coronado in front in the concluding Bar One Racing Telebetting 1800 624 524 Maiden at Dundalk.

The Street Cry colt pressed the leader in second inside the final quarter mile. The 3/1 shot had been held up through the concluding mile event but he then led approaching the final furlong.

He edged to his left inside the final furlong and was confirmed the half length victor over Balcony following a steward's enquiry.

"He was off the bridle all the way the last day but travelled well into the race today. He's going to be a nice horse," added O'Brien on Ballydoyle's three-year-old.

The Turf Club Veterinary Officer examined Zulu Alpha (USA), trained by D. K. Weld, at the request of the Stewards and reported the animal to be (to follow).

The Stewards enquired into possible interference on two separate occasions in the straight involving De Coronado (USA), ridden by Donnacha O'Brien, placed first and Balcony, ridden by W.M. Lordan, placed second, where it appeared that Balcony received interference . Evidence was heard from the riders concerned. Evidence was also heard from T.J. Comerford, representing A.P. O'Brien Master of Donnacha O'Brien. Having viewed the recording of the race and considered the evidence, the Stewards made no alteration to the Judges' placing and took no further action.

P.J. Smullen, rider of Zulu Alpha (USA) trained by D. K. Weld, reported to the Clerk of Scales that his mount missed the break, ran free, lost his action early in the straight and was eased thereafter.

The Prix Jean Romanet is among several options under consideration for Lady Bowthorpe following her heartwarming success in the Qatar Nassau Stakes at Goodwood on Thursday.

Bua Boy has come in for plenty of market support for the Guinness Galway Tribes Handicap Hurdle which goes to post at 5:00 this evening.

The going for this evening's fifth day of action at Galway is described as Good following a dry night.

Battaash out to raise the roof at Goodwood

Battaash bids to thrill the Goodwood crowds again with an unprecedented fifth triumph in the King George Qatar Stakes this afternoon.