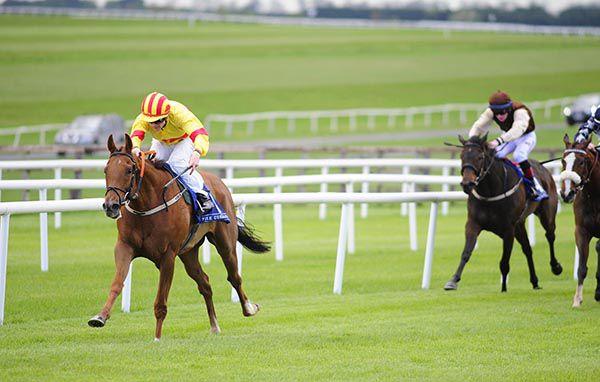 Alans Pride pulverised his 29 opponents with a very taking victory in the apprentice handicap at the Curragh.

The six-year-old gelding landed a punt from 12/1 in the morning down to 11/2 favourite on the off.

He tracked An Saighdiur in this seven-furlong contest before easing to the front three furlongs out.

It was job done as he tanked clear by the final furlong and strode home to land the spoils by three and three quarter lengths.

Keep Believing (16/1) kept on nicely for second with Thiswaycadeaux (8/1) third and Korbous fourth at 33/1.

Gary Halpin, after riding his second winner of the campaign, said: "Yeah it is starting to get going thank God. It has been tough to get going. Racing has started to come a bit quicker now and it's good to ride a winner for Richard. He's a fellow that's going places.

"He does a super job with his horses and very seldom he's wrong when he tells you one he fancies. He fancied him a bit and he asked me in Cork last week to try and keep myself available for him. He’s done it great.

“I probably got there plenty soon enough on him. He quickened up really well and we had to go when we did especially on that ground as it’s hard to stop and you need to keep their momentum going.

"I won a handicap off him (Alans Pride) up here and I was second in Listowel to a well-handicapped horse of Aidan Howard's (Youceeyouceecee).

Richard O'Brien added: "I'm not racing but that fella felt great coming up to this. The ground was a concern as I felt he might do too much. Massively pleased for Charlie Maguire and Alan Devine, great friends of mine and very grateful to Gary for riding him. I really wanted Gary for him and it all worked out."

Bentley excited by Kinross ahead of Guineas

Harry Bentley believes Kinross is capable of providing him with a first Classic success in the QIPCO 2000 Guineas at Newmarket on Saturday.