Heffernan strikes again on All The King's Men 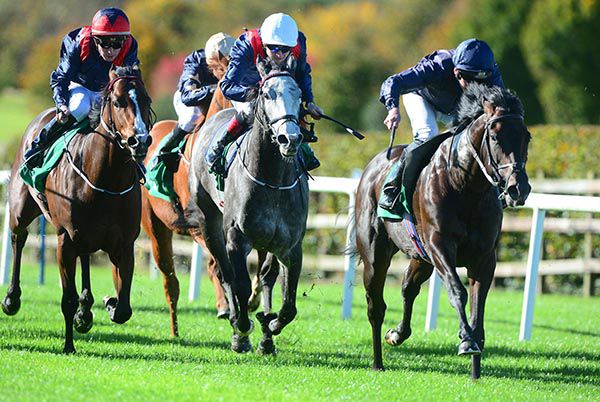 Fresh from his big wins on Low Sun and Norway at Newmarket yesterday, Seamie Heffernan struck again at Navan this afternoon, as he guided All The King's Men to victory in the Listed Irish Stallion Farms EBF Legacy Stakes.

Successful on his penultimate start at Naas, the son of No Nay Never since finished fifth in the Blenheim Stakes at Fairyhouse.

Having opened at 10/1 this afternoon, the Aidan O'Brien trained victor eventually went off at 8s, and was sent straight to the front by Heffernan.

He was ridden over a furlong from home, and kept on well from there to score comfortably by a length and three parts.

Recon Mission (7/1) took second under Leigh Roche for Michael O'Callaghan, while Eclipse Storm (8/1) was another half a length back in third.

Never No More, also trained by O'Brien, was sent off the even money favourite, and he finished a disappointing seventh.

Heffernan said afterwards: "He's a winner and he's been working a little bit better than he's been running. The No Nay Never's enjoy racing, and I'd say you can run them often. He's a stallion I like."

Doncaster on Saturday the next stop for Shishkin

Shishkin is all set to make his eagerly-awaited next appearance in the Irish Thoroughbred Marketing Lightning Novices’ Chase at Doncaster on Saturday.

Inspection on Friday ahead of Cheltenham Saturday Festival Trials Day

Saturday’s high-profile fixture at Cheltenham is in doubt after officials called a precautionary inspection for 2pm on Friday.