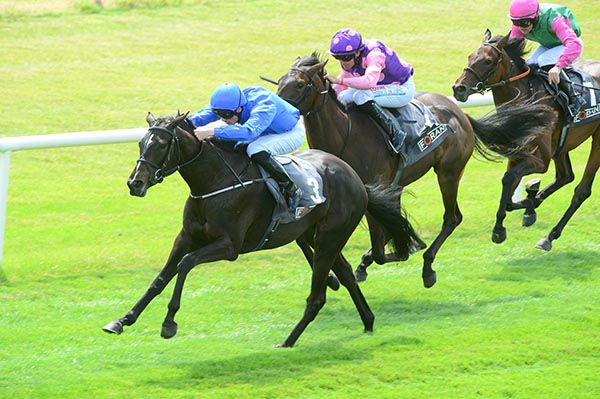 Jessica Harrington continued her superb run with juvenile fillies this season when Silence Please made a winning debut in the Foran Equine Irish EBF Auction Fillies Maiden at Gowran Park.

The daughter of Gleneagles was well-backed in the morning at all rates down from 11/1 and went off a 6/1 chance in this 11-runner seven furlongs event.

Tom Madden switched her out to challenge over a furlong out, and she came home strongly to beat Believe In Beauty by a length and a half.

Flamingo Bay made most of the running but could find no extra inside the final furlong to finish a further length and three quarters away in third.

Taggalo was installed the 7/4 favourite following a promising debut at the Curragh last month but after throwing down a challenge early in the straight could find no extra from over a furlong out eventually finishing sixth.

Harrington said, “Another nice performance from another filly. She's nice and we liked her at home. She hadn't been to a barrier trial or anything. She didn't come into me until quite late, in April, but she's just a nice filly and she's been doing everything right.

“She's a very good looking filly. She's related to Plinth so she'll stay and she's also a half-sister to a Group 1 two-miler in Australia. She's a lovely big filly.

“She didn't really know what to do when Tom pulled her out but she was good. I'd say there'll be a lot more to come. Probably the good ground today might have helped her a bit.”