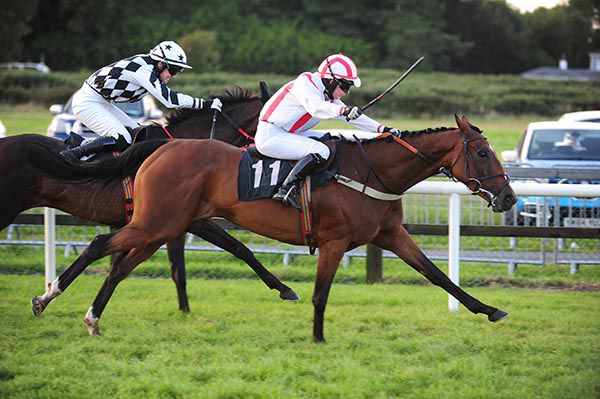 Seventh on debut at Limerick in July, the Ross O'Sullivan trained four-year-old finished a close fourth on her next start at Sligo.

Having opened on-course at 4/1 this evening, the daughter of Fame And Glory eventually went off the 3/1 market leader under Jody Townend.

Settled in mid-division, the bay victor made good progress into second from three furlongs out, and was soon ridden to lead.

She wandered slightly inside the final furlong, but kept on well in the closing stages, going on to score by half a length from Auntie Mary (4/1) in second.

Maxine O'Sullivan was aboard the runner-up for John McConnell, while 6/1 chance Scotsman's Bay was another two and a quarter lengths back in third.

"She's a filly that we got last summer and she's been in training all winter. She's by a great sire and has a nice pedigree," said O'Sullivan.

"She wanted a bit of nice ground and I can't see her going on winter heavy ground. She's only a four-year-old and she'll go on to be a nice spring/summer hurdler next year as well.

"She has her job done now and might get a little break.

"She's still very green. It got a bit tight in Sligo and horses came in on top of her. She still needs to come on a bit but she's a spring/summer horse for next year."