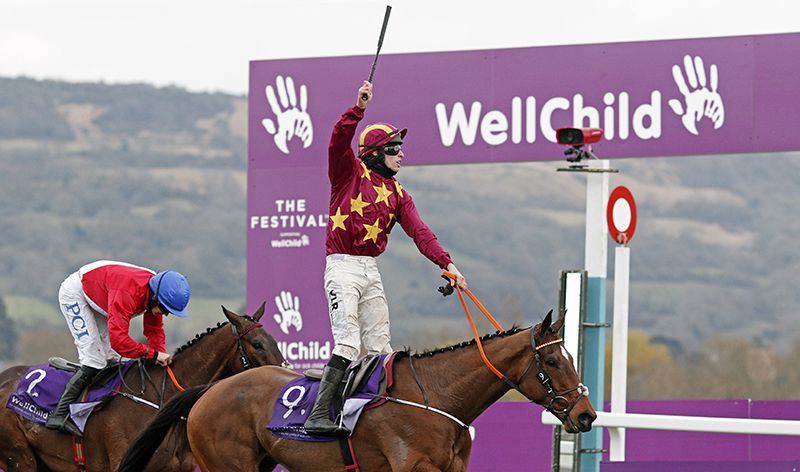 Henry de Bromhead claimed a famous one-two in the WellChild Cheltenham Gold Cup as Minella Indo repelled the challenge of A Plus Tard.

With Rachael Blackmore opting to partner A Plus Tard, it was left to Jack Kennedy to steer home the winner in the Festival feature.

It was a straight shootout between the stablemates from the top of the straight, with Minella Indo going for home first.

Blackmore tried to rally her mount after the last in a bid for another historic success, but A Plus Tard just could not catch the 9-1 winner.

Dual champion Al Boum Photo had to settle for third as the 9-4 favourite, with Native River fourth and Frodon fifth.

Leading British hope Champ was pulled up at an early stage after a series of jumping errors.

De Bromhead said: “It was incredible. Jack was brilliant on Minella Indo, who is just such a tough horse.

“It’s all down to the crew at home, who work so hard. And the support of all our clients, it’s just brilliant.

“Whatever it is about here — he’s a little bit like Put The Kettle On — he just comes alive.

“He’s fast asleep at home on a daily basis, but even saddling him today, he was like he was before the Albert Bartlett — he was kicking the back door and so up for it.

“We obviously had the mishap at Christmas and he wasn’t as good in the Irish Gold Cup, but we wanted to get a clear round that day and Rachael rode him brilliantly.

“It’s all come together here and it’s fantastic.

“To win a Cheltenham Gold Cup is something you dream about.”

De Bromhead added of riding arrangements for his pair: “Rachael had the choice. I always try to stay out of that and I left it to her.

“Everyone has been asking me on the run-up to the race which had the better chance, but I couldn’t split them.

“I don’t like to interfere (with Blackmore’s choice) as I’d hate to put her the wrong way.

“She knew they were both training well.”

Kennedy told ITV Racing: “I can’t believe it, this is what I’ve dreamt of since I was a child. I’m just so grateful to Henry and (owner) Barry Maloney for giving me a chance and the opportunity to ride him. I can’t thank them enough, I’ll owe them forever.

“This is what I live for. I just can’t believe this is after happening, I’m delighted.

“I landed over the last and he pricked his ears, he was pulling up, but it wasn’t out of tiredness and when he heard Rachael coming back at him, he took off again. It’s unbelievable stuff.”