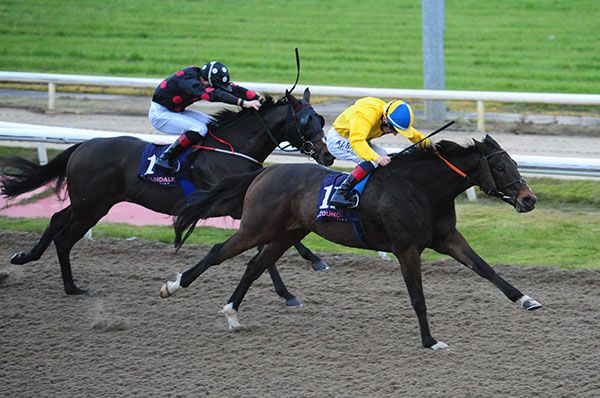 Hilary McLoughlin has endured a frustrating time with Count Of Carabass this year but the handicap stalwart registered a fifth career win, all under jockey Chris Hayes, in the DKIT Students Union Race Day Handicap at Dundalk today.

The son of Ad Valorem was today having his 67th start and while 22 jockeys have ridden the eight year old, 21 have failed where Chris Hayes has succeeded — five times.

Hayes, the man some call 'Magic', who was on board Count Of Carabass for a first success at Listowel in September 2014 and today, racing from 2lbs out of the handicap, steered him to a three parts of a length win over Mutadaawel

Trainer McLoughlin later reported “he reacted to the second flu vaccine that was mandatory and it took a bit of time to get over that. Then he started being slow out of the stalls when he finally came right. We used the hood the last three times and it’s worked a dream.

“Usually I leave him off this time of the year as he starts to peter off but because he missed the early part of the season I said we’d go to Dundalk and see what happens. I knew the last day that he really liked it, and he was in great form and had no weight today.

“He was pushed wide the last day and otherwise he could have gone very close. Sometimes he’s better in these better races because they go a nice gallop which suits him.

“He’s won five times now and Chris has rode him each time. He’ll come back here and we’ll keep going until he tells me otherwise.”