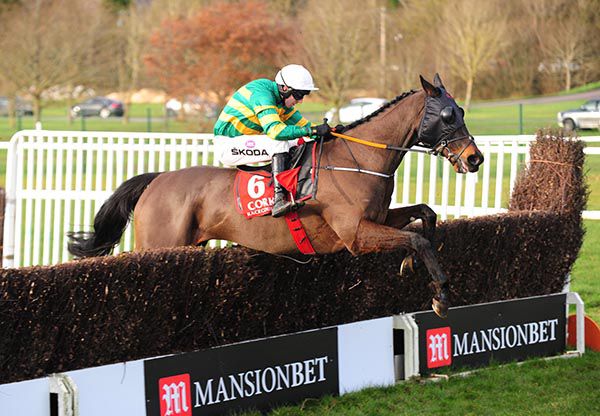 There was a fourth Gordon Elliott winner on the day, and a second for J P McManus and Mark Walsh at Cork when Minella Till Dawn sauntered away with the MansionBet Proud to Support Irish Racing Handicap Chase.

In first-time blinkers Minella Till Dawn was looking good from some way out and the 5/1 shot eventually accounted for Great Khan and Debuchet by thirteen lengths and two and a quarter lengths.

"It has been a great day, four winners. He was probably going to be second the last day when he fell at the last but I'd say the blinkers woke him up today so it was grand,” said Elliott.

"He is a big horse and now that he has got his head in front he might win again. He had a few niggly problems and it mightn't have been the strongest race in the world but he won so it was great."

A.W. Short, rider of The Informer trained by Seamus Fahey, reported to the Clerk of Scales that his mount pulled up having gone lame.

Owing to the low lying sun, the Stewards granted permission for fence # 8 to be omitted from this race.