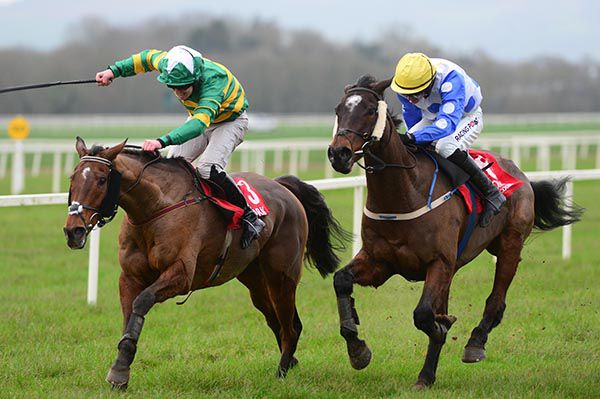 Following on from his win in the feature with Midnight Stroll Robert Tyner completed a 186/1 Cork double with Concordin in the Follow Us On Twitter Handicap Chase.

Concordin (16/1) was one of three J P McManus runners in this two and a half miler and he was behind his fellow green and gold contenders Kilfenora (7/2 into 9/4 favourite) and Mon Lino (14/1) in the betting.

The market wasn’t a reliable guide in this case as the Jody McGarvey-ridden Concordin got the better of fellow local hope Danse Away on the run-in, scoring by a neck.

They left Capture The Drama eleven lengths back in third.

"He has been in all year but we were just waiting for suitable ground and his work-rider, my wife Mary, was very bullish about him," revealed Tyner.

"He was going for the veterans' chase at Limerick over Christmas but got an infection in his foot two days before it. He only missed a couple of days with it and we had the shoe back on after three days and we came here instead.

"He was travelling well all the way and they were apart jumping the final fence and I just thought he'd need company but they came together coming up to the line and it helped, as he idles a bit.

"We'll got for more of the same next."

Owning to a request from Broadcasters, the Stewards granted permission for this race to be delayed by 1 minute.

The Stewards interviewed Thomas P.O'Connor, trainer of Lilshane concerning the conduct of this horse at the start, who refused to race. Having viewed a recording of the incident and considered the evidence, the Stewards in view of the horses past history referred the matter to the CEO of the IHRB for further investigation.