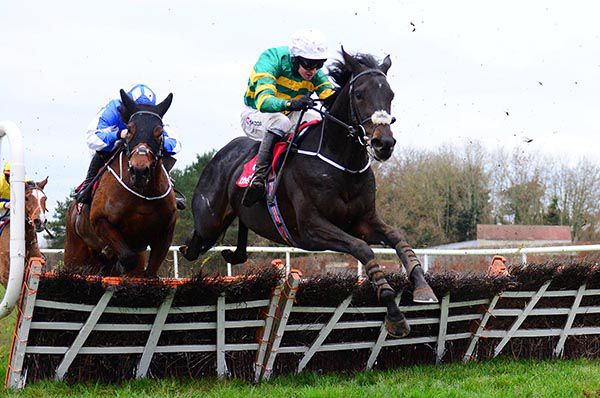 J P McManus, Joseph O'Brien and Mark Walsh combined for a second win on the day at Punchestown with Gardens Of Babylon (7/1) in the Small Stakes Big Wins With Tote 3-y-o Maiden Hurdle.

This big field two miler was opened up with the departure of 13/8 favourite Fenta Des Obeaux at the first flight.

Plenty still held claims in the straight but twice raced Ballydoyle recruit Gardens Of Babylon quickened up smartly from the last to take the honours by half a length and three lengths from Surin (6s into 9/2) and Way Back Home (7s into 5s).

Surin is owned by Gigginstown House Stud and they also had the fourth and seventh, Lignou and Star Max

“He did well to win because it was only his third run ever and I thought he'd probably come on a bit from it,” commented O'Brien on the winner, a son of Camelot.

“It was nice to see him go and do that. He jumped well. They went slow and got racing in front of him but he went and got them in fairness to him.

“There is a winners race in Fairyhouse and you also have the graded race at Leopardstown. We'll see.

“I thought he went to the line well. He hadn't run for a long time and he'd be entitled to come on for it.

“He had a few problems I think but he has ability.”

J.B. Kane, rider of Tashman trained by Gavin Cromwell, reported to the Clerk of Scales that his mount hung left throughout.

At the request of the Stewards, D.F. O'Regan, rider of Livingstones Quest trained by Gavin Cromwell, reported to the Stewards' Secretaries that his mount was keen early on and stayed on past tired horses.

The Stewards received a report from the Irish Horseracing Regulatory Board Clerk of the Scales, Mr. Hugh Hynes, that J.C. Canavan, rider of Fly Round The Bend had weighed in at 1.1Ibs overweight. Evidence was heard from the rider concerned who accepted that this was the case. Having considered the evidence, the Stewards were satisfied that J.C. Canavan was in breach of Rule 231 and suspended him for 2 racedays having taken his previous record into consideration.

The Stewards fine D. Robinson €200 for failing to present himself to be weighed out for this race in accordance with Rule 196t.