3 for Whelan 2 for Halford as Sky takes Dundalk feature 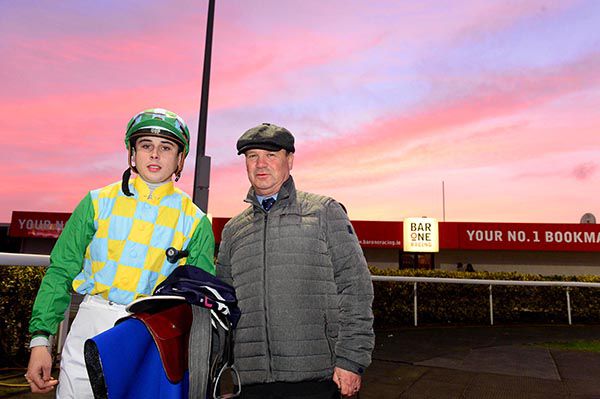 There was a third winner on the evening at Dundalk for Ronan Whelan, and a second for Michael Halford when 2/1 favourite Sky Seven prevailed after a thrilling conclusion to the Moffett Engineering Ltd Median Auction Race.

It got close between a few of them near the finish, necessitating a steward’s enquiry, in a contest where less than three lengths separated all seven.

Up front Sky Seven edged out Invasion Day by half a length.

Fourth placer Lafayette Hill was making no impression when short of room close home. Major Reward (6th) suffered in the same incident but the judge's placings remained unaltered after the enquiry.

What appeared to be a couple of mating hares caught many an eye as the runners fought it out at the business end but they had no influence on the outcome and soon fled to the in-field.

“He's a smashing horse. It had the makings of a good race and I'd say it rode like a good race,” said Halford.

“He's just getting stronger all the time and I'd have no worries about him going on the grass either.

“We'll take our time, he's done well to do what he's done so far, and we'll pick a race in six or eight weeks time.

When asked if he could tackle stakes company he replied:- “He's a work in progress and I'd say he'll get there eventually. We'll see what the handicapper does and see what sort of a program there is for him.

“He's got a great will to win, a great action and he's getting stronger all the time. That's the strongest he's been but I think there is more to come.

“Another furlong would be no bother to him in time.”

S. Crosse gave his evidence in the presence of A. Slattery.

Having viewed the recording of the race and considered the evidence, the Stewards found that any interference was accidental in nature and took no further action.

S. Foley, rider of Major Reward trained by Adrian Paul Keatley, reported to the Clerk of Scales that his mount got tight for room in the last 100 yards.

W.J. Lee, rider of Lafayette Hill trained by T.M. Walsh, reported to the Clerk of Scales that his mount was checked going to the line.