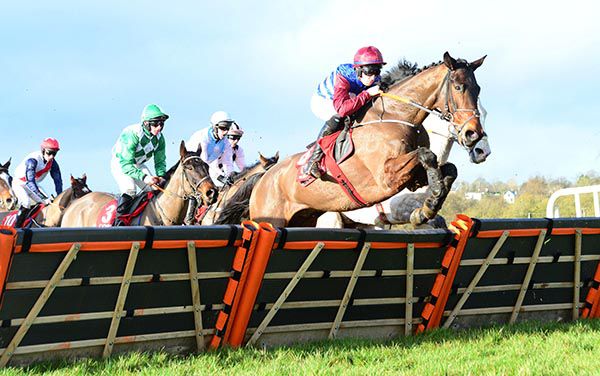 Escaria Ten (5/4 out to 15/8 favourite) made a winning debut for the McNeill family to continue the Gordon Elliott domination at Cork, taking the MansionBet Faller Insurance Maiden Hurdle.

With the McNeill’s jockey Adrian Heskin here for the one spin on the programme, Cullentra House’s representative added to the earlier gains of his stable companions Texard and Recent Revelations under Jack Kennedy.

Escaria Ten wasn’t as good at the last as Atlantic Shore and that seemed to open the door for Philip Fenton’s 12/1 shot.

However Heskin always looked reasonably happy that he’d get the French-bred back up, which he did, by three parts of a length. Minella Encore (4s into 5/2) and Shanwalla (9s into 6s) were five and a half lengths and a length and a half back in third and fourth.

"He is a nice big horse and is a big chaser. That's our first runner for the McNeill family so it's nice to start off on a good note and we think we have a nice bumper horse as well," said Elliott.

"He was bought to be a big chaser and whatever he does this year is only a bonus. He is still raw and Adrian said that if he winged the last he'd probably have won well but he did what he just had to do.

P. Townend, rider of Golden Spread (GB) trained by W.P. Mullins, reported to the Clerk of Scales that his mount got very tired in the latter stages of this race.