6 in the mix for Betway Bowl 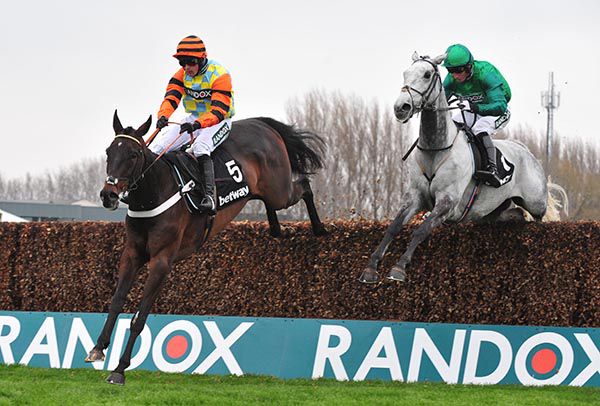 Bristol De Mai, Clan Des Obeaux and Kemboy feature in a six-strong field for the Betway Bowl at Aintree.

The Nigel Twiston-Davies-trained Bristol De Mai filled the runner-up spot behind Might Bite in this Grade One contest 12 months ago — and the dual Betfair Chase hero returns at the top of his game on Thursday, after finishing a creditable third in last month’s Cheltenham Gold Cup.

Having impressed in winning the King George VI Chase at Kempton and the rescheduled Denman Chase at Ascot, Paul Nicholls’ Clan Des Obeaux was widely regarded as the chief British hope for the Gold Cup — along with defending champion Native River.

After travelling strongly, the seven-year-old weakened into fifth place, but is likely to be better suited by Aintree’s flatter track.

Kemboy was the shortest priced of four runners in the Gold Cup for Willie Mullins, but unseated his rider after the very first fence.

The Voix Du Nord gelding heads to Merseyside in a bid to provide Ireland’s perennial champion trainer with a second victory in the race — after he struck gold with the popular Florida Pearl in 2002.

Kemboy is one of three Irish raiders, along with Henry de Bromhead’s Balko Des Flos and Road To Respect from Noel Meade’s yard.

Balko Des Flos has plenty to prove, having been largely disappointing since running out a brilliant winner of the Ryanair Chase at last year’s Cheltenham Festival.

Three-time Grade One winner Road To Respect has sound claims, however, after finishing third behind Frodon in the Ryanair last month.