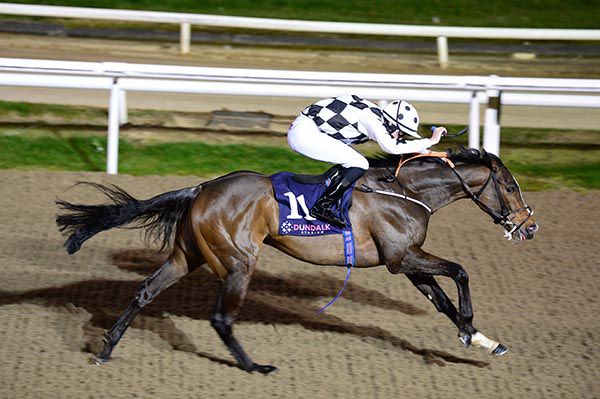 Champion apprentice from 2017 Oisin Orr rode the last two winners at Dundalk, rounding it off in style for the Noel Kelly yard on Wild Shot (16s into 8s) in the Race Displays Handicap.

Half-an-hour beforehand the Donegal man triumphed in the three-year-old maiden on Mouriyani for Dermot Weld.

Wild Shot dwelt and was pushed along towards the rear early. The So You Think gelding turned that unpromising position around though, eventually leading from the two pole before asserting a furlong out for a two and a half length verdict over Latchet

“I've always thought he was a mile-and-two horse or even a mile-and-a-half and he's done it very well there,” said Kelly.

“He's always slow at the start and loses a lot of ground.

“The mile race tonight looked weaker but we put him in the two in case he didn't get in. The mile-two was always the one I wanted to go for.

“With a bit of luck he can win again shortly. I wouldn't be afraid of going up to a mile-and-a-half with him.

“Hopefully he can't punish us too much for that race and we can keep a light weight on him.”

The Stewards interviewed L.T. McAteer, rider of Latchet, concerning his use of the whip in the latter stages of this race.

Evidence was heard from the rider concerned. Having viewed a recording of the race and considered the evidence the Stewards were of the opinion that L.T. McAteer was in breach of R10 (3)(f) by using his whip with excessive frequency.

Having taken his previous record into consideration, the Stewards suspended L.T. McAteer for 1 raceday.