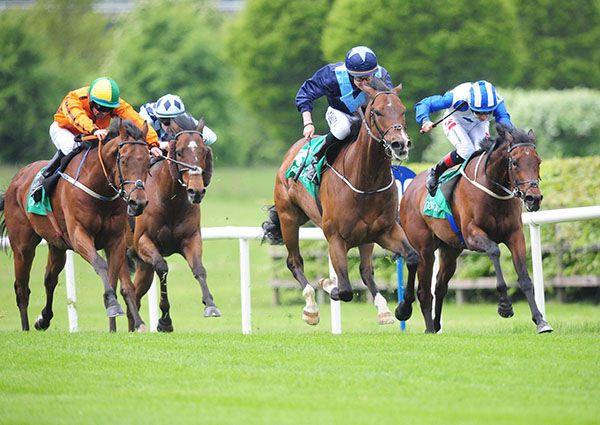 Aleef followed-up on a good effort at Naas last month, as he took the navanracecourse.ie Handicap under Shane Foley for Ken Condon.

Twice successful when trained in the UK, the son of Kodiac went unsold for 7,500 guineas at Tattersalls in October.

He finished down the field on debut for Condon and the Cinco Partnership over the course and distance in March, but performed much better last time out, finishing second of twenty-two behind Mokhalad.

Having opened at 7s on-course this afternoon, the son of Kodiac eventually went off at 11/2 under Shane Foley.

Towards the head of affairs throughout, the bay six-year-old was ridden over a furlong from home and soon led, keeping on well in the closing stages to prevail by three parts of a length. Amanaat (7/1) came through to take second under Rory Cleary for Denis Hogan, while Bailly (8/1), who disputed the lead with the winner for most the contest, was another half a length back in third.

UK raider Only Spoofing was sent off a well-backed 3/1 favourite (12s in early shows and 4s on-course), but he failed to make an impact and finished sixth.

"He had a good run behind Mokhalad the last day," said Foley.

"I was afraid of firm ground but it's actually beautiful good ground and when I walked the track I was a bit more confident.

"He stuck at it well. Ken does a great job with any horse he gets. Hopefully Romanised runs a big race for him in the Lockinge later."