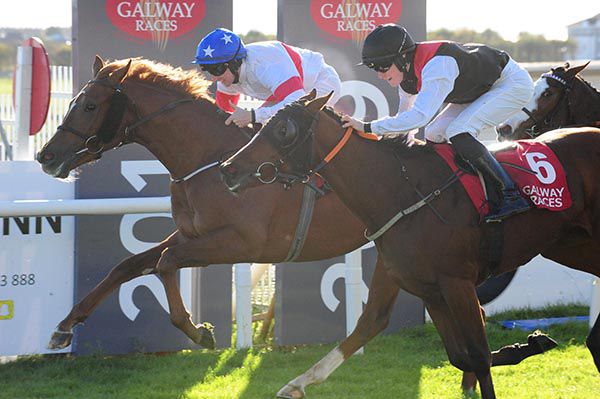 Jockey Conor Maxwell has reinvented himself as a flat jockey in recent times and steered the topically named, Fozzy Stack trained Meaningful Vote to a shock 33/1 success in the Swordsecurity.com Handicap at Galway today.

Running today in first-time cheek-pieces, the son of Pivotal stayed on gamely in the home straight to eventually score a head win over Dragon Of Malta

Better known as a jump jockey, Maxwell has this summer concentrated his attentions to the flat and while today was just his second winner this year, he has amassed a sizeable support base, as Meaningful Vote was his 123rd ride 'on the level' this year.

Following the win Maxwell stated “I've been busy on the flat all summer, have had a few winners lately and will be busy at Dundalk and over jumps during the winter.

“I started out my career as an apprentice but got heavy and went jumping almost straightaway but I'm good and level at around nine stone now and it is easy to keep that weight during the summer.

“Riding in the 'ten winners or less' races at Dundalk last winter got me going and it just kept rolling into the summer and it has worked out. I'm not rushing off anywhere fancy for the winter and there are plenty jumpers to ride and will continue to mix it for as long as I can.”

Trainer Stack wasn't present and regarding Meaningful Vote, Maxwell added “he works well at home but got lost in his maidens and it was his first handicap today and the cheek-pieces helped him an awful lot today.

“He loves that ground, he made hard work through the race but finished it out well and hopefully will improve for it.”

There have been three 'meaningful votes' in the U.K. Parliament on Brexit this year with confirmation today that the EU has agreed to a Brexit extension until January 31st.