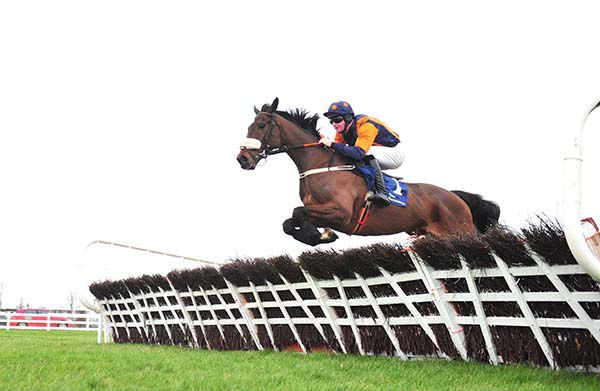 All For Joy
© Photo Healy Racing

All For Joy ended a five-race series of runner-up efforts when landing the opening Naas Rugby Club Maiden Hurdle at Naas today, for trainer Oliver McKiernan and jockey Barry Browne.

The son of Robin Des Pres looked set to record a fitting win at the Co Kildare venue on February 9, in McKiernan's own Cavan Developments-sponsored race, only to be headed in the closing stages by Advantage Point but today made no mistake when making all to beat Momus by six lengths.

Point to point winner All For Joy's previous racecourse form figures read '24-2222-2' and afterwards McKiernan stated “he’d a lot of two’s but was unlucky to come up against a lot of good horses.

“He was nearly always in front in bumpers and the last day we held him up and I think it took its toll. He was keen early with a hood on him.

“We decided to do nothing today and let him travel within himself. He works at home like a good horse.

“He got what he deserved and normally you don’t get what you deserve, man or beast.