All The Angels lands a punt in Killarney 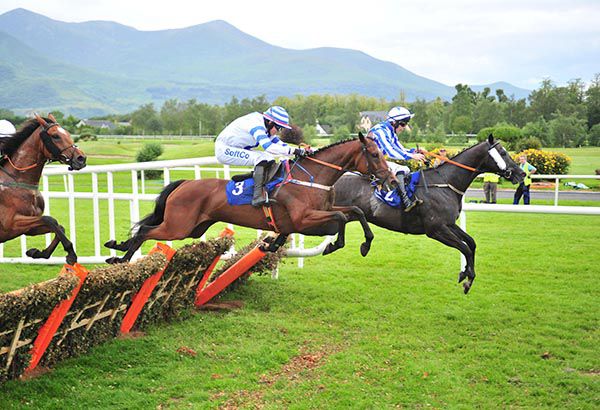 All The Angels, far side, jumps the last ahead of Lucky Phil
© Photo Healy Racing

Eoin McCarthy's All The Angels /a> rallied to great effect to land a gamble in the Irish Examiner Handicap Hurdle.

He was headed by 7/2 favourite Lucky Phil on the run-in, but gamely surged home in the closing stages under Kevin Brouder to win by two lengths at 8-1, having been as big as 28-1 in the morning.

There was a two and a quarter length gap back to Doyen Bay in third at 6/1.

Eoin McCarthy said: "He had a good solid effort at Roscommon a month ago and I'm delighted to win at a local track.

"He was previously a 40,000gns yearling and has taken to jumping really well and Kevin said he got in deep to every hurdle but was rapid fast up in front.

"He is only a baby and hopefully there will be a few more in him.

"We won't aim too big and Listowel (in September) will be his main target as all his owners are from north Kerry.

"We've only three horses to run on the track this summer but I'm very busy with young horses; we think we're going to have a good year this year, fingers crossed."