Another big win at Aintree for Tizzard and Power 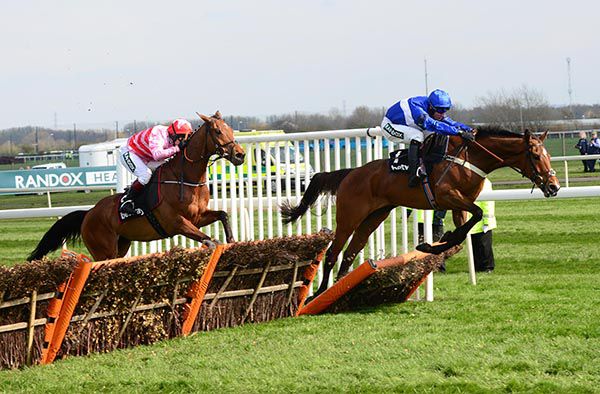 Reserve Tank dug deep to cause an upset in the Betway Mersey Novices’ Hurdle at Aintree.

After only hinting at promise on his first two starts over hurdles, the Colin Tizzard-trained five-year-old has really turned a corner since the turn of the year — registering successive wins at Sandown and Kempton.

However, he faced a significant step up in class for this two-and-a-half-mile Grade One affair and was priced up as a 20-1 shot under Robbie Power.

Reserve Tank travelled strongly on the heels of the leaders for much of the race and jumped to the front three flights from home.

Brewin’upastorm — fourth in the Ballymore Novices’ Hurdle at Cheltenham last month — did his best to close the gap, but Tizzard’s charge found extra from the last hurdle to prevail by three and a quarter lengths.

Tizzard said: “He’s barely blowing — that’s when you know they are a real good horse.

“He had ulcers at Christmas, looked terrible in his coat and was going nowhere, but in his last three runs he’s improved with leaps and bounds each race.

“Robbie gave him a cracking ride, gave him a breather on the bend and everything. He’s a strong stayer.

“I should think he’ll go chasing next year and I’ll have a job to keep the owners away from Punchestown. A few of them own Lostintranslation and they are going anyway.

“I’ll have a look at the races at Punchestown, but that trip looks fine. He stays well, but had no trouble laying up.”

Olly Murphy was pleased with Brewin’upastorm’s performance in defeat.

He said: “He has run a cracker. He was just second best on the day and there are no excuses.

“He is a horse that is going to jump fences next season. I just thought he would pick Colin Tizzard’s horse up from the back of the last. I don’t know whether he was outstayed or whether it was the end of a long season catching up.

“Of course you are a little disappointed that he didn’t win, but he has done us proud.

“He has got some big days ahead, but that’s him finished for the season. He is a horse to look forward to.”

The Nigel Twiston-Davies-trained One For Rosie and Nicky Henderson’s 11-4 favourite Angels Breath dead-heated for third.

Twiston-Davies said: “Photos have not been the greatest thing (One For Rosie won and then promptly lost a race at Sandown recently in a mix up over winning posts). He is a really nice horse, but the race was not run to suit him.

“He will go chasing next season and he will get three miles one day.”

Henderson said: “Nico (de Boinville) said he was nice and relaxed and then the race started up a bit and he got keen again.

“He has got to learn to race a little bit more sensibly. He is doing too much. He is the eternal enthusiast like me!

“I should think he will be novice chasing next year. He won’t run again this season.”