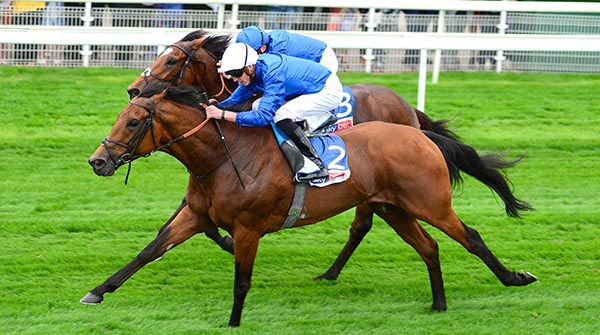 The Breeders’ Cup Turf is next on Old Persian’s agenda following his latest top-level triumph in Canada last weekend.

Charlie Appleby’s charge has won nine of his 16 career starts to date — with his big-race victories including the King Edward VII Stakes at Royal Ascot, the Great Voltigeur at York and the Dubai Sheema Classic at Meydan.

The four-year-old disappointed in the Coronation Cup at Epsom on his return to European action, and was then a beaten favourite in a Group One in Germany last month.

However, he was back in the winning groove when dominating the Northern Dancer Turf Stakes at Woodbine last Saturday — and Appleby feels his charge has earned himself a trip to Santa Anita in early November.

He said: “We were delighted with Old Persian, and he’s come back home in good order.

“The Breeders’ Cup is in our sights — that was the pencilled plan going into the Northern Dancer, and I think he deserves a crack at it now.

“A mile and a half on the turf at Santa Anita should suit him well.”

A few days after the Breeders’ Cup has been run, Appleby will chase a second successive victory in the Melbourne Cup, with last year’s winner Cross Counter set to be joined by stable companion Ispolini.

Cross Counter could finish only fourth when a hot favourite for last Sunday’s Irish St Leger, but Ispolini was in winning form on the same afternoon — landing the German St Leger at Dortmund.

“The Irish Leger was a bit frustrating, because it was a messy race, and I know William (Buick) felt he could never get into any sort of rhythm,” Appleby added.

“We’re taking the positives out of it, and we feel he probably did well to run as well as he did in the circumstances.

“Because it wasn’t an end-to-end gallop, he didn’t have as hard a race as he might have done otherwise, and he’s come out of it well.

“Hopefully he’ll go straight back to the Melbourne Cup now, along with Ispolini. He was second to Cross Counter in Dubai earlier in the year, and ran well behind Stradivarius in the Yorkshire Cup.

“He got a bit tired the other day, which he was entitled to, and hopefully that will leave him spot on for Australia.”