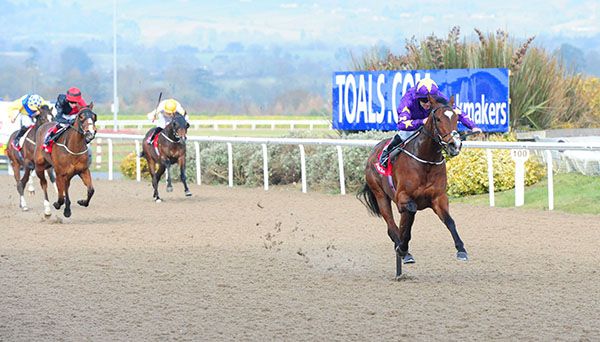 Highly Approved completed a hat-trick of wins in emphatic fashion, as she blitzed her rivals in the Dundalk Stadium Business Club Claiming Race.

Having won her maiden here last month, the Joseph O'Brien trained daughter of Approve followed-up at the all-weather venue on Friday last.

Available at 11/10 this morning, the bay victor opened on-course at 8/11, before going off the clear favourite at 8/15 under Wayne Lordan.

Settled in second, she cruised through to lead under two furlongs out, and soon stretched clear, keeping on strongly to score easily by ten lengths.

The front-running Shecanrally was best of the rest, finishing second under Andrew Slattery for Patrick Prendergast at 14/1. Eadbhard (40/1) completed the placings another two and three parts of a length back in third, with Niall McCullagh in the saddle for Michael Grassick.

Lordan said afterwards: "She won here on Friday night which was probably a more competitive race. She enjoys this place and is improving. She came out of the last run well and is a very hardy filly. She looked well today, and Joseph has done a good job keeping her fresh."

There were ten claims in total for Highly Approved, with John Keogh from Monasterevin the successful bidder. The filly will now be trained by Shane Duffy.

Bonnie Baugh was claimed by George Dobbs and will be trained by his wife Prunella.

K.J. Leonard, rider of Hanrai trained by W.J. Martin, reported to the Clerk of Scales that his mount hung left in the straight.

G.P. Halpin, rider of Florida's King trained by Adrian Brendan Joyce, reported to the Clerk of Scales that his mount hung left.