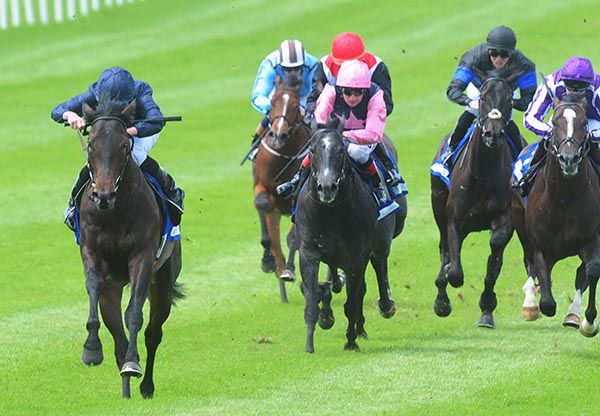 Arizona paid a nice compliment to his course and distance conqueror from May 6th, Sunday Sovereign, when leading home a Ballydoyle 1-2-3 in the Tally Ho Stud Irish European Breeders Fund (C & G) Maiden at the Curragh.

Sunday Sovereign has since been bought by King Power Racing and they’ll likely be well pleased with that investment after watching 8/15 shot Arizona beat stable companion King Of Athens by eight lengths.

Unfortunately Red Assembly (a fatality) slipped up inside the final furlong when running a very decent race in pursuit of Arizona.

Arizona is now 7/1 first show for the Coventry with Paddy Power.

Winning trainer Aidan O’Brien said on the Ryan Moore-ridden Arizona: “We really liked him the first day when he was green. He looks an Ascot two-year-old.

“Ryan said he galloped through the line which is a good sign. You would have to be very happy with him.”

The Stewards enquired into the fall of Red Assembly, ridden by L.T. McAteer in the closing stages of this race. L.T. McAteer reported that his mount fell having sustained an injury. Having viewed a recording of the incident and considered the evidence, the Stewards took no further action.