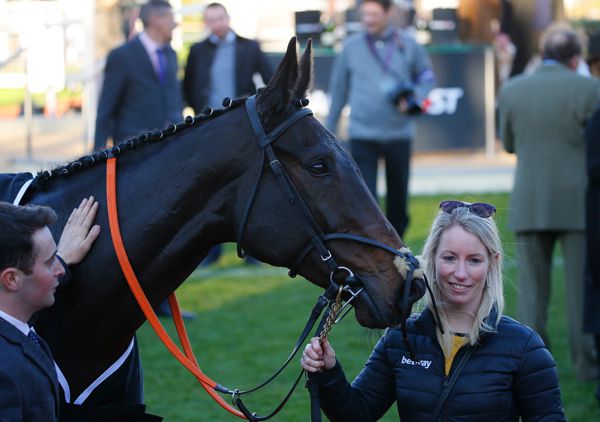 Mullins has won three of the last four renewals through Un De Sceaux, Douvan and Footpad, with only Altior, who beat Mullins' Min in 2017, preventing a clean sweep.

Duc Des Genievres has won one of his three outings over fences and maintains his partnership with Paul Townend.

The Gigginstown House Stud-owned runner is coming back in distance after winning a Grade One at Limerick over Christmas, before finishing third behind La Bague Au Roi in the two-mile-five-furlong Flogas Novice Chase at Leopardstown.

Elliott said: "He won over an extended two miles and three furlongs at Limerick. I know Getabird made a mistake that day and I’m not saying he was going to beat him, but he also won a Grade Three over slightly shorter at Navan the time before, so stepping him back in trip might not be an issue.

"He ran well last time after being slightly slow at a couple of fences. He made up good ground between the second-last fence and last before getting tired, so I think he will have a good each-way chance in the Arkle."

He said: "He's travelled over well and we couldn’t be happier with him, to be honest.

"I think he’ll run a good race. He has 7lb or 8lb to find with one or two horses, but I think he’s capable of improving at least that much.

"He’s been schooling well and we're very happy, so we’ll see how we go.

"He's a first Festival runner for me and the owners, so it’s very exciting and hopefully he won’t disgrace us."

Kayley Woollacott is confident she has the well-fancied Lalor in peak condition ahead.

The seven-year-old leapt to the head of the betting for the two-mile Grade One with a brilliant display at Prestbury Park in November - but returns with questions to answer after suffering an odds-on reverse in testing ground at Sandown the following month.

There will not be a dry eye in the house should Lalor prevail on the opening day of the Festival, with his previous trainer Richard Woollacott - Kayley’s late husband - having taken his own life in January of last year.

"We’d prefer it if the rain stayed away, but good to soft ground should be fine and if it is soft, then at least we’re getting fresh ground," said the Devon-based handler.

"He’s in good form at home. Everything is fine with him and I think his preparation has gone very well.

"It looks an open race, but I wouldn’t swap him for anything else in it."

Lalor's chief rival at the top of the market is the Mick Channon-trained Glen Forsa.

The Mahler gelding was rated just 114 when making a successful fencing debut over almost three miles at Chepstow in November.

Roll the clock forward just four months and he is now on a mark of 150, after dominating another handicap at Kempton before readily accounting for fellow Arkle contender Kalashnikov in the rearranged Kingmaker Novices’ Chase at Sandown.

Channon said: "He’s turned out to be a star really. He had an injury 18 months ago which set us back a year, but he’s come back a lion.

"It doesn’t matter what trip we run him over. He’s got bags of speed and his jumping is immaculate.

"All of a sudden we’re going to Cheltenham for the Arkle and thinking we’ve got a good chance.

"He just jumped them into the ground at Sandown and I don’t think we’ve got much option now — we’ve got to go and give it a go."

Amy Murphy feels a return to a left-handed track will be of benefit to Kalashnikov.

The Newmarket trainer said: "He’s in good form, we’re happy with him and looking forward to it.

"Nothing came to light after Sandown. We ran plenty of tests so it was just one of those days. He had an off-day for whatever reason. When they can’t talk, you don’t know.

"He’s going back left-handed which will help and he won’t mind the ground either. Hopefully we we’ll see back him to his best."

Gary Moore is hoping Knocknanuss can bounce back from a heavy fall in the Irish Arkle.

He said: "We’d have preferred it if the rain had stayed away, but there’s nothing we can do about that.

"It took him a while to get over the fall at Leopardstown — he came back with a bruised shoulder. He had a bit of physio and he’s moving as well as ever again now.

"I think he’s entitled to be there. It doesn’t look the strongest Arkle there’s ever been and we’ll let him take his chance."

"He’s a horse we have always held in very high regard. The first half of the season went wrong for him. Things weren’t right for him, then he won his last two novice chases,” said the Slad-based trainer.

"They weren’t the best races in the world, but he couldn’t have won them any easier than he did.

"In an open race in an open year, we thought it’s worth taking our chance."

Us And Them (Joseph O’Brien) and Slate House (Colin Tizzard) complete the line-up.