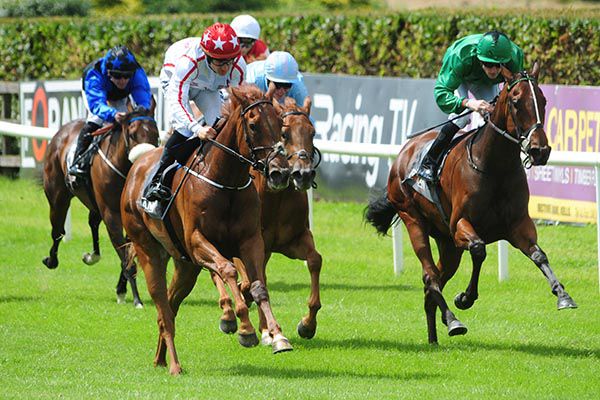 Punita Arora will try to keep up Jessica Harrington’s good run of form as she tackles Saturday’s Princess Margaret Keeneland Stakes at Ascot.

Harrington saddled two impressive winners at Leopardstown on Thursday evening, and she is looking to recent Navan scorer Punita Arora to further augment those statistics in this Group Three heat.

“She’s coming over and we’re looking forward to running her,” said the Moone-based trainer.

“She did very well to win last time as she got a bad bump at the start and Shane (Foley) said he very nearly fell off.

“I’ve been happy with her since. I know it’s a big step up from a maiden auction race to a Group Three, but we’ll see how she goes.”

Summer Romance puts her unbeaten record and huge reputation on the line at the Berkshire venue.

Having justified prohibitive odds on her racecourse debut at Yarmouth, the daughter of Kingman produced a scintillating display to run out a six-length winner of a Listed event at Newmarket — a performance which saw her promoted to favouritism for next year’s 1000 Guineas.

Trainer Charlie Appleby said: “We know what she has done over six furlongs and she is proven over that trip at a good level.

“She has won on quick ground and slow ground, and with the forecast the way it is, we don’t know what conditions we will be encountering, but we are relaxed about it as she has handled both conditions to date.

“She has done well since Newmarket. There are a few horses that have broken their maidens nicely and this is their next step, but I feel they all have her to beat.

“We are hoping to step her up in trip, but she is showing a lot of natural pace, so we have no concerns about sticking to six for the moment.”

Another filly to make a big impression at Newmarket last month was Ultra Violet, who overcame a tardy start to win by eight lengths.

Trainer Ed Vaughan is looking forward to seeing his charge test her powers at a higher level.

“It looks a hot race, as you’d expect,” said the Newmarket handler.

“Our filly is in good form. She wouldn’t blow you away in her work and she did surprise me a bit (on her debut).

“We now know she’s got the ability, she’ll be fitter for the run and the experience should have brought her on, so we’ll see.

“We’ll know a lot more about where we stand afterwards.”

The David Evans-trained Good Vibes was considered for the Queen Mary at Royal Ascot after winning the Marygate Fillies’ Stakes at York in May, but had to miss the showpiece meeting due to a dirty scope.

Connections hope she can make up for that disappointment on her belated appearance in Berkshire this weekend.

Jason Maguire, racing manager for owners Paul and Clare Rooney, said: “She was a good second on her first start, then she was good at Salisbury and then she won the Listed race at York very impressively.

“That day they went hard early and she stayed really well, so the step up to six furlongs should be fine. Unfortunately she missed Ascot as she wasn’t right as she had a dirty scope.

“She is back healthy again and this is her first start after a bit of a break, but we are hoping for a big run. Dave Evans said this is probably the best (horse) he has trained and Dave knows what he is doing.

“We are hoping she is not a one-hit wonder.”

So Sharp was a winner on her racecourse bow at Newbury at the start of the month, beating John Gosden’s subsequent winner Dark Lady, who reopposes this weekend.

So Sharp’s trainer, Archie Watson, said: “She won well at Newbury and it was probably a strong maiden.

“She deserves to step up in class and we’ll see how we get on.”

Karl Burke has booked Frankie Dettori to partner his filly Living In The Past.

The daughter of Bungle Inthejungle caused an upset when beating odds-on favourite Mighty Spirit at Beverley three weeks ago — and that form has received a significant boost since, with Mighty Spirit finishing a creditable third in last Saturday’s Super Sprint at Newbury.

“She’s a nice filly. She’s stepping up in class, but I think she deserves to take her chance,” said Burke.

“We were delighted with her at Beverley. We knew she’d come forward from her first run, when she was quite green, and she won nicely.

“Frankie and Ascot seem to go together quite well, that’s the idea. I’ll let you know after Saturday!”