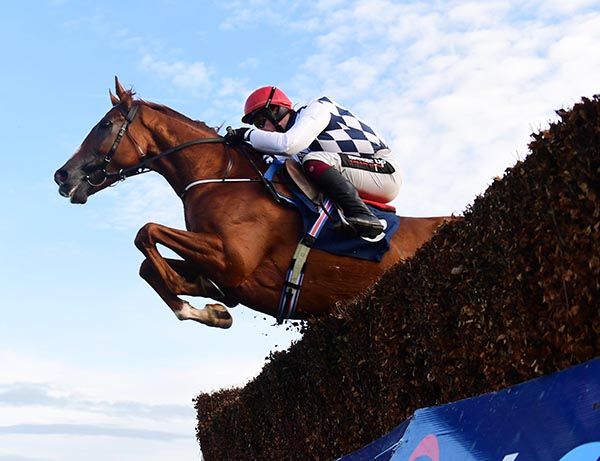 Cheltenham Festival winner Banbridge got his chasing career off to an exciting start when making all for an easy win in the Join Gowran Park Racing Club Beginners Chase.

The Joseph O’Brien-trained gelding gained the most significant of his three hurdle wins in the Martin Pipe Conditional Jockeys’ Handicap Hurdle this March but on this evidence can prove even better over fences.

The field was reduced to just six runners in the absence of four of his rivals including Ain’t That A Shame (going) and JJ Slevin had an armchair ride as the six-year-old jumped from fence to fence.

He took control after the second last and stayed on well on the run-in for a facile eight and a half lengths victory over Indigo Breeze with Soloman Lane another 14 lengths back in third.

Slevin said, “He jumped very well. He came from a good point-to-point school in the north of Ireland. We had schooled him a bit at home and he has been very good.

“You'd be hoping he might achieve something similar to what he achieved over hurdles, you'd be happy with that.

“He has a very good brain for it and was always very good at home. Even over hurdles we were always thinking that a fence would suit him.

“He's probably not a real winter horse, I think he's more of a spring horse.”

Paddy Power introduced Banbridge at 20/1 for both the Turners Novice Chase and the Brown Advisory at Cheltenham next March.