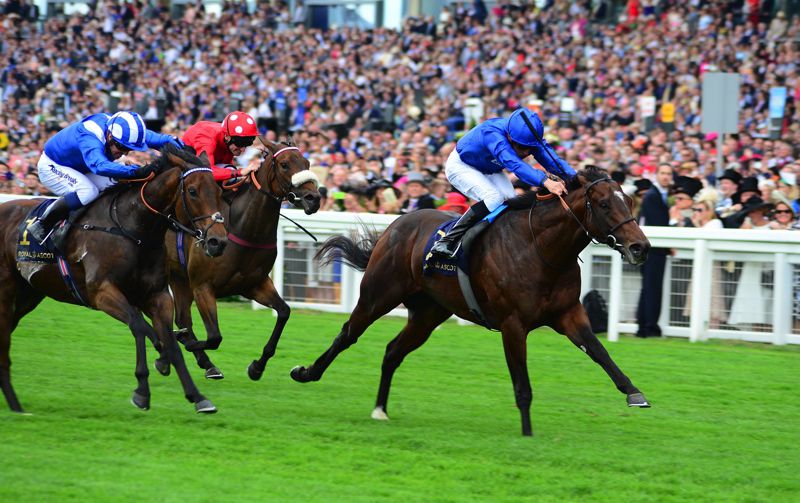 Charlie Hills is confident everything points to a piece of record-breaking history for Battaash as he bids for a hat-trick in the King George Qatar Stakes at Goodwood.

Battaash has already joined an elite clutch of famous names to have won Friday’s Group Two showpiece twice, including Lochsong in the 1990s and, shortly after World War II, Abernant.

The Dark Angel gelding put himself in the same bracket 12 months ago when he saw off another dual winner, the veteran Take Cover — who unusually had prevailed in the alternate years of 2014 and 2016, and was back again at the age of 11 to try to repeat the dose.

Hills’ mercurial sprinter is on a faster track as he seeks to go one better than the rest as a five-year-old, and his trainer has high hopes

“It would be an achievement, and to get the record would be great,” said the Lambourn trainer.

“I can’t see why it shouldn’t happen.”

Hills appears to have good reason for his confidence, however, based on Battaash’s two performances so far this summer.

A second successive Temple Stakes win at Haydock and then a runner-up berth behind the brilliant but now retired Blue Point in the King’s Stand at Royal Ascot are an exact replication of his 2018 campaign en route to Goodwood.

But Hills said: “Last year we were never 100 per cent happy with Battaash — he took a long time to come in his coat and he was always a little a bit on edge in his training.

“Ever since he has been back in training this year, he has been a different horse, a pleasure to train and to be around.

“His run at Ascot was a confirmation of all of that — and looking back at that race, nothing really went too right for him.

“We thought we would get a good pace off the Australian horse (Houtzen), but she unfortunately slipped coming out of the stalls and took us back out of the race.

“We had to make our mid-race move earlier than ideal — and at a track such as Ascot, it was going to find him out for stamina.”

Goodwood, by contrast, plays abundantly to Battaash’s speedy strengths — and he has also appeared calmer on the Sussex Downs than he has on occasion at other tracks.

Hills added: “I am not sure why, but Battaash does seem to love Goodwood and in his two previous runs there he has behaved very well. Maybe the contours of the track help him?

“He is a tremendously fast horse — I think at Ascot he clocked 47 miles per hour between the three-furlong and two-furlong markers — if we get fractions right, he will be a hard horse to beat.

“He does really come alive at Goodwood. He is quite small, quite nimble and maybe he does just handle the track better than some of those bigger sprinters.”

Battaash is sure to be a short-priced favourite in his historic quest — but Quinn, for one, is hoping to push him hard with El Astronaute.

“We’re looking forward to running him,” the North Yorkshire trainer said of the hardy six-year-old, who will be having his eighth run since early April.

Two of his last three outings have brought front-running victories on trips to Ireland, where El Astronaute most recently had to settle for a laudable second in Group Two company at the Curragh.

“Battaash will probably be very hard to beat,” said Quinn.

“But it’s a horse race — he’s a very tough horse and he’s in very good form.

“His last three runs have been phenomenal really. He thrives on racing — and I’m really looking forward to running him, because he’s exciting.

“Goodwood will suit him — he’s won there already.”

Houtzen was trained by Toby Edmonds in Australia when she travelled over in June to finish eighth behind Blue Point and Battaash at Ascot.

She has moved on to be housed at Manton by Martyn Meade, who reports the filly has acclimatised well and will be cheered on by her globe-trotting owners.

He said: “Sometimes these top sprinters can be difficult to handle, especially when they’ve travelled around the world, but she seems to have settled in really well.

“Her work has been very good and the Aquis (Farm Pty Ltd) boys are coming over, so we’re all pretty excited.

“It’s obviously a tough race, but if she can get a place we’ll be delighted.”

Among the remaining contenders, Henry Candy’s Rebecca Rocks was supplemented after her Listed win at Ayr in June, and Michael Dods’ Intense Romance won twice at that level last year.

Tim Easterby and Middleham Park’s Copper Knight was also a Listed winner over the past month, at York