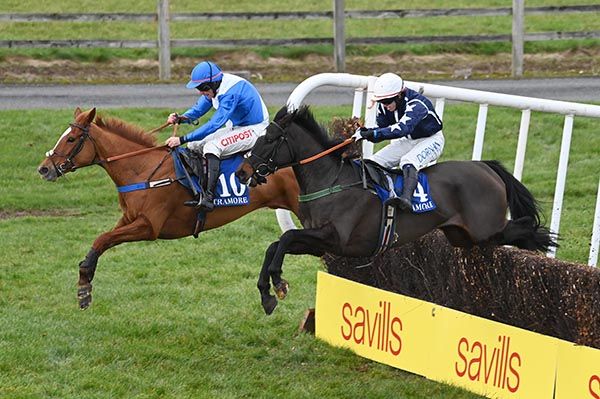 Davy Russell was soon in front on the 6/4 favourite and she was joined by Malinas Glory going to the third last in the two-mile-five contest.

That rival has the advantage running down to the second last but was joined by Indie Belle over the final fence and the Flemensfirth mare soon grabbed the lead.

She stuck on well in the closing stages as 22/1 shot Prince Zaltar stayed on well on the run-in to get within three-parts-of-a-length.

The winner was taking a substantial drop in class today having failed to make an impact in Listed company at Thurles last Thursday.

"She ran last Thursday and ran well in a Listed chase. It was probably a bit soon coming back here but we had entered on Thursday morning prior to the Thurles run, just in case anything happened there,” said Widger.

“She came out of that race grand and we said we'd come here. We could have gone for this or the handicap but we said we'd go for this instead. It looked an easier option for her.

"It's brilliant to get Davy. We only have one horse in training so it's great to get him to ride her. Treacysenniscorthy done his knee the last time he ran at Leopardstown so he is finished now and is out in the field.

"There is a 0-116 handicap hurdle at Leopardstown on the 28th of this month. We will probably try to freshen her up and go there. She is rated 93 over hurdles so she'd have a little squeak if she snuck into the bottom of that."